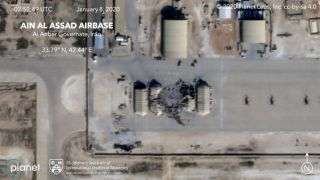 A closeup of the wreckage at Iraq’s al-Asad airbase, as captured on Jan. 8, 2020, by one of Planet’s SkySat satellites.

You don’t have to be on the ground in Iraq to see the damage done by Iran’s recent missile attack.

Satellites operated by San Francisco-based company Planet have captured photos of Iraq’s al-Asad airbase, one of the sites hit in last night’s (Jan. 7) bombardment. The sharp images clearly show which buildings were reduced to ruin and rubble.

Iranian officials have said that the attack was retaliation for the death of high-ranking general Qasem Soleimani, who was killed by a U.S. drone strike last week. The al-Asad airbase houses American troops, as does Erbil airport, the other site hit last night by Iranian missiles.

No Americans or Iraqis were killed or wounded in the attack, President Donald Trump said during a news conference today (Jan. 8). Iraq received advance warning about the strike and passed that information along to the U.S., CNN reported today, citing Iraqi and American officials.

Planet is most famous for its huge constellation of Doves, Earth-observing cubesats the size of a loaf of bread. But the al-Asad imagery comes courtesy of SkySats, Planet representatives said. The company operates 15 of these spacecraft, each of which is about the size of a minifridge and can resolve features as small as 28 inches (72 centimeters) on Earth’s surface. (The Doves, for comparison, have a resolution of about 10 feet, or 3 meters.)

A view of the damage at Iraq’s al-Asad airbase, captured on Jan. 8, 2020, by one of Planet’s SkySat satellites.

Planet currently has about 120 operational Doves in orbit, along with the 15 SkySats and five other “RapidEye” craft. These satellites capture photos for a variety of customers and uses. One of those uses involves keeping tabs on the rocket and missile programs of nations such as Iran and North Korea, as the new photos show. (And this past August, SkySat imagery revealed that an Iranian rocket apparently exploded on the launch pad.)

Planet has successfully deployed more than 350 satellites into orbit since its first craft went up in 2013.