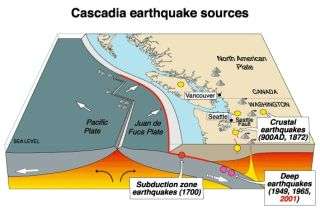 A schematic drawing of the Cascadia subduction zone. New research suggests that tiny, imperceptible quakes in the region are connected to the movement of fluid deep below the surface.

Every 14 months, silent earthquakes ever-so-slightly rattle the Cascadia subduction zone, which is capable of producing a magnitude 9.0 earthquake. Now, research shows that these so-called aseismic quakes are tied to fluid moving miles underground.

These findings don’t affect what we know about the risk of a dangerous quake in the Cascadia region; that information is well-known from the cycle of stress build-up and release during large earthquakes, said Pascal Audet, a geophysicist at the University of Ottawa and a co-author of the new research. A better understanding of the aseismic quakes could eventually help bridge the gap in understanding between this well-observed earthquake cycle and the processes happening deep within the subduction zone.

The new study, published Jan. 22 in the journal Science Advances, looked at the Cascadia subduction zone, a seismically active region spanning from northern California to Vancouver Island, in which the oceanic Juan de Fuca plate is sliding under, or subducting under, western North America. According to the Oregon Office of Emergency Management, the area has experienced earthquakes of magnitude 9.0 in the past and has the potential to experience quakes of similar or larger sizes in the future. A massive earthquake in the region could also trigger a tsunami of up to 100 feet (30.5 m).

The inner workings of the fault system, though, are still challenging to understand. Researchers now have sensitive ground instruments that can detect extremely slow, subtle movements deep within the subduction zone, Audet said. These instruments have revealed that parts of the fault between the two subducting plates regularly slip, moving slowly over a period of days or weeks. The slip is too gradual to cause noticeable shaking at the ground level, but it can put pressure on new parts of the fault, raising the risk of large earthquakes.

Researchers also know that the rocks that undergo this slow slip, 25 miles (40 kilometers) down, are saturated with fluid, Audet said. The fluids, trapped within small pores in the rock, are under a great deal of pressure from the rock and Earth above them. This weakens the saturated rock, which may contribute to the slow-slip episodes on the fault.

The new research investigated the link between the fluids and the slip. Audet and his colleagues compared 25 years of tremor data from southern Vancouver Island with data on rock structure and the pressures many miles down. There were 21 slow-slip earthquake events during that time period. With each imperceptible quake, they found, fluid pressures quickly dropped.

“This could mean that part of the fluids escapes into the overlying rock mass, or the micro-fractures [in the rock] expand and decompress the fluids to some degree,” Audet wrote in an email to Live Science. “This change is very rapid, however, and occurs over a period of days or perhaps weeks.”

The finding is the first direct evidence that the fluids in subduction zones move around during slow slip, Audet said. But now, it’s a chicken-and-egg question. It’s not clear from the available data whether the fluid movements actually trigger the slow quakes, or whether the fluid moves in response to the slipping of the rocks.

Why physicists are determined to prove Galileo and Einstein wrong