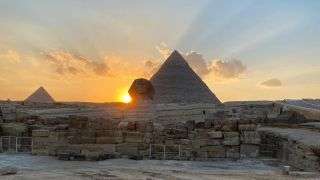 The sun set over the right shoulder of the Sphinx during the spring equinox this year.

The Sphinx had a “distinctive astronomical” moment with the sun during the spring equinox when, in a shining flourish, the sun set on the shoulder of the half-man, half-lion statue on March 19, according to the Egypt Ministry of Antiquities.

This phenomenon happens only twice a year, during the spring in March and the fall equinox in September, according to the ministry.

During the equinox, Earth’s axis doesn’t point toward or away from the sun, meaning that the Northern and Southern hemispheres receive equal amounts of the sun’s light. In other words, the day and the night are equal in length.

It’s well known that cats enjoy basking in the sun, and the 241-foot (74 meters) tall Sphinx is no exception. The mythical half-man, half-lion is carved out of limestone bedrock. Its face might show the likeness of Pharaoh Khafre, the fourth king of ancient Egypt’s 4th dynasty (2575 B.C. to 2465 B.C.), who had the second and third Pyramids of Giza built, according to Encyclopedia Britannica.

The Sphinx is also strategically placed for the summer solstice in June, when the sun sets between the pyramids of pharaohs Khufu and Khafre.

The Sphinx’s position during the equinoxes and summer solstice suggests that the ancient Egyptians purposefully positioned the hybrid lion-man statue. “This phenomenon proves that archaeologists were wrong when they said that the ancient Egyptians had found an ancient rock by accident and turned it into a statue of a human face and a non-human body,” the Egypt Ministry of Antiquities wrote in a Facebook post.

Other ancient cultures also built large monuments that captured the fleeting moments during the solstices and equinoxes, including Stonehenge in England, a “calendar-rock” in Sicily, a Neolithic henge in Germany and a Maya city in what is now Tulum, Mexico.