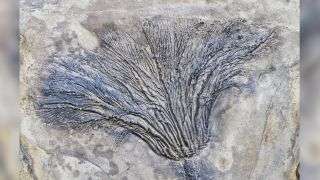 This image shows a fossilized plant that is not from the New York fossil forest, but is meant to illustrate such plants.

The oldest forest in the world was just discovered in upstate New York, just west of the Hudson River and a bit south of Albany.

Discovered in a limestone quarry, all that remains of the 386-million-year-old forest are some fossilized root networks in a Cairo, N.Y. limestone quarry. Long ago, the giant trees of the ancient forest likely covered a region stretching into Pennsylvania and beyond, the researchers wrote. And they’re about 2 to 3 million years older than the previous record-holder for the most ancient forest, discovered 25 miles (40 kilometers) west in Gilboa, New York.

“It is surprising to see plants which were previously thought to have had mutually exclusive habitat preferences growing together,” said Chris Berry, a researcher at Cardiff University in Wales and co-author of a study on the ancient forest published Dec. 19 in the journal Current Biology, in a statement.

When the forest existed, this part of the Hudson Valley was a river delta, which is why fish fossils were found in the same quarry.

None of the trees in the old woods reproduced using multicellular seeds, the researchers wrote, and instead produced offspring using single-cell spores. There were three types of tree in the ancient forest: cladoxylopsids, which were like primitive ferns without the flat green leaves (these  were also widespread at the Gilboa site); archaeopteris, which in some respects resembled modern conifers but had flat, green leaves; and a single example of a third, unidentified type of tree.

Eventually, this forest was wiped out, likely by a flood, the researchers surmised.