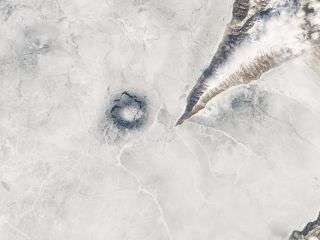 A satellite view of an ice ring on Lake Baikal. Is it the one true ring to rule them all?

The humongous, mysterious “ice rings” that pockmark the world’s deepest lake during Siberia’s winter and spring months may look like icy crop circles, but they’re not due to alien activity, atmospheric conditions or even, as previously thought, methane bubbles percolating from the lake’s bottom.

Rather, it appears that warm, swirling eddies of water under Lake Baikal’s thick ice are responsible for these ice rings, some of which are up to 4 miles (7 kilometers) in diameter and can be seen from space, a new study finds.

Solving this mystery, however, wasn’t an easy affair. An international team of researchers from France, Russia and Mongolia elected to travel to the lake biannually in 2016 and 2017, drill holes in the ice near the rings, and drop sensors into the water below. One year, their van got stuck in the ice. Twice.

The researchers’ van got trapped in the ice on the eastern boundary of a ring in Lake Baikal in March 2016.

In Siberia’s colder months, Lake Baikal — the largest freshwater lake in the world, by volume — freezes over. The ice is so thick, people routinely drive over it, said study lead researcher Alexei Kouraev, an assistant professor at the Laboratory for Studies in Spatial Geophysics and Oceanography (LEGOS) at the Federal University in Toulouse, France.

“It’s a no-brainer,” Kouraev told Live Science. “It’s a very long lake, and if you want to go from one side to another, either you do 400 kilometers [248 miles] one way and then 400 kilometers on the other coast.” But the trip across the ice is just about 25 miles (40 km), “so the choice is evident,” he said.

However, while the ice is thick outside of and inside these rings of thin ice, the rings themselves can put vehicles and their occupants at risk, Kouraev said.

The fellowship of the ice rings

Ice rings have formed on Lake Baikal since at least 1969, and can last anywhere from days to months, satellite images show. However, these rings have unpredictable behavior, and show up in different parts of the lake from year to year. Moreover, they tend to appear in late April, but can crop up as early as January or as late as May, Kouraev said.

But scientists couldn’t figure out how they formed. One of the more popular theories, indeed one that Live Science reported on in 2009, suggested that the greenhouse gas methane bubbles up from the lake’s deep bottom to cause these rings. But Kouraev and his colleagues noticed that some of these ice rings formed in the lake’s shallower waters, areas with no known gas emissions.

After analyzing data from the sensors they had dropped into the lake, the scientists found that the lake had warm eddies flowing clockwise under its ice cover. The currents weren’t as strong at the center of the eddies, which explained why the centers of these rings still had thick ice, Kouraev said. However, the current at the edge of the eddies was strong, which explained why the ice on top of this edge was thinner, he said.

The sensors revealed that the water at these eddies was 2 to 4 degrees Fahrenheit (1 to 2 degrees Celsius) warmer than the surrounding water. What’s more, the eddies had a lens-like shape, a phenomenon that is common in oceans but rare in lakes.

Notice how the ice rings change shape from March to April in 2016. (The April 17th image is not to scale with the others.)

But why did these eddies form in the first place? According to the sensors, which were kept underwater for 1.5 months at a time, as well as thermal-infrared satellite imagery, it appeared that the eddies formed each fall, before the lake froze over. Moreover, strong winds blowing in waters from the nearby Barguzin Bay could help them form, Kouraev said.

He noted that, so far, these ice rings have only been found in Lake Baikal, as well as the nearby Lake Hovsgol in Mongolia and Lake Teletskoye, also in Russia.

As for drivers who cross the frozen lake in their vehicles, Kouraev said that while cracks are easy to spot, the rings themselves can be harder to see at ground level because they’re covered with ice. As a public service, Kouraev and his colleagues, who jokingly call themselves the Fellowship of the Ice Rings, have written booklets, given presentations and told Russia’s national park service and ministry of emergencies about the rings. They also routinely update their website about the location of newly formed ice rings, which are visible in satellite images.

The study was published online in the journal Limnology and Oceanography in October 2019.

What is quantum cognition? Physics theory could predict human behavior.