Home Science and Technology Jet-Powered Car Roars Past 500 Mph. But Can This Beast Hit 1,000... 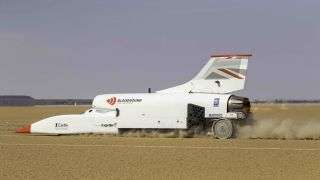 The Bloodhound set a top speed of 501 mph in tests in South Africa.

An arrow-shaped car designed to reach supersonic speeds — it’s outfitted with a jet engine and its own parachute braking system — just reached 501 mph (806 km/h) in tests in the Kalahari Desert in South Africa.

The record attempts will put incredible strain on the car. Any attempt to travel faster than sound creates high aerodynamic drag and a violent shock wave of rapidly expanding air that can be heard for long distances as a “sonic boom” — the same as the thunder heard when lightning heats air to supersonic speeds.

How a supersonic vehicle withstands the increased drag and shock wave, and how it stays stable and controllable at such tremendous speeds, are the critical challenges of its aerodynamic design. Aerodynamic challenge

Although traveling faster than sound is now routine for the fastest military aircraft, it’s been achieved three times before on land, by another British jet car called Thrust SSC 22 years ago.

“Thrust SSC was an incredible vehicle, and it achieved a remarkable thing of being the first car to go faster than the speed of sound,” said one of Bloodhound’s designers, Ben Evans, a University of Swansea aerodynamic engineer. “But the reality is that we did learn a lot about what not to do in the future.”

Bloodhound’s long, narrow shape is very different from the relatively wide cross section of Thrust SSC, a design that the engineers say will allow Bloodhound to reach a much higher speed — about 650 mph (1,046 km/h) — before the increased drag and small shock waves in the air around it start to affect the handling of the car, he said.

When Bloodhound exceeds the sound barrier, its aerodynamics will become slightly easier to control, but it will still be trailing the large supersonic shock wave it creates.

A key question is how that shock wave will interact with the ground a few inches below the car — a problem not faced by supersonic jets.

Evans and his team gather data after each test drive from 200 pressure sensors placed around the body of Bloodhound and load sensors on each wheel. The data is processed to create detailed computer models, resulting in a kind of “virtual wind tunnel” that shows how the car behaves at different speeds, he said.

The 7-ton Bloodhound car is powered by a Rolls-Royce EJ200 turbofan jet engine — the same engine used in the Eurofighter Typhoon aircraft.

Before the land-speed record attempt, Bloodhound will also be fitted with a powerful rocket engine to push it past the sound barrier.

Mark Chapman, the chief engineer of Bloodhound LSR, said his team was measuring the aerodynamic stresses on the car at higher and higher speeds, and testing and refining the braking systems, which include a parachute and air brakes.

Evans said bringing the car and its driver safely to a stop was as important as achieving supersonic speeds.

“At 1,000 miles an hour, if and when we get that far, we will be covering a mile in three-and-a-half seconds, and we have only got a 12.4-mile [20 kilometer] track,” Evans said. “So one of the critical things at those really high speeds is, ‘Are all our braking systems going to work?'”

A team of more than 300 people keep the test track free from stones and other obstacles, which would spell disaster for a vehicle traveling at hundreds of miles an hour.

The team will spend a further two weeks testing the car before South Africa’s summer rains flood the track on Hakskeen Pan, a lakebed in the Kalahari Desert, and make it unusable for a few months.

“That is what makes it such a great surface,” Chapman said. “Because of the fact that it floods every year, it levels out and then it just bakes hard … like concrete.”

Both Chapman and Evans have been with the Bloodhound project since it started in 2007. Bloodhound was expected to attempt the land speed record in 2016. But the project ran short of money and almost folded until the company that owns it was bought last year by British car-parts millionaire Ian Warhurst.