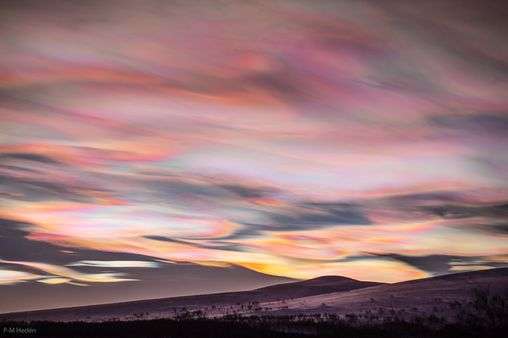 The beautiful photo was snapped by photographer P-M Heden on January 3, and shows rare ‘mother-of-pearl clouds’ over Sweden

At first glance at this image, you’d be forgiven for mistaking this photo as an abstract painting.

But the photo is very much real, and is featured as NASA ’s Astronomy Picture of the Day.

The beautiful photo was snapped by photographer P-M Heden on January 3, and shows rare ‘mother-of-pearl clouds’ over Sweden.

NASA explained: “Vivid and lustrous, wafting iridescent waves of colour filled this mountain and skyscape near Tanndalen, Sweden on January 3.”

These strange clouds are nacreous clouds – rare and very high clouds that look just like mother-of-pearl.

The Met Office explained: “Nacreous clouds form in the lower stratosphere over polar regions when the Sun is just below the horizon. 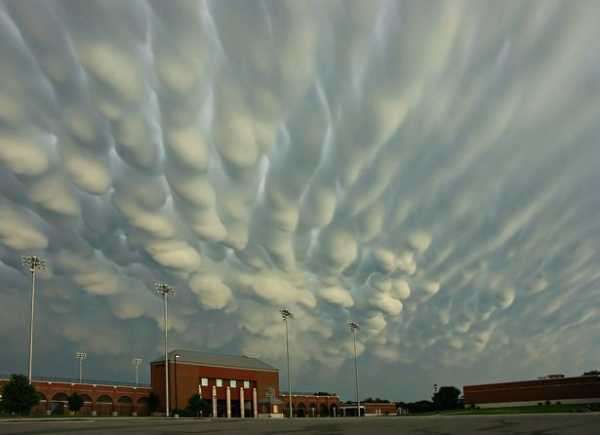 “The ice particles that form nacreous clouds are much smaller than those that form more common clouds.

“These smaller particles scatter light in a different way, which is what creates the distinctive luminescent appearance.”

While nacreous clouds are usually very rare, they’ve made several appearances in the northern hemisphere this winter.

NASA added: “This northern winter season they have been making unforgettable appearances at high latitudes.”

This isn’t the first time that NASA has featured a photo of rare clouds as its Astronomy Picture of the Day.

Last month the space agency featured an image of bubble-like clouds seen over Nebraska back in 2004.

NASA explained: “Normally, cloud bottoms are flat. This is because moist warm air that rises and cools will condense into water droplets at a specific temperature, which usually corresponds to a very specific height. As water droplets grow, an opaque cloud forms.

“Under some conditions, however, cloud pockets can develop that contain large droplets of water or ice that fall into clear air as they evaporate.”

Utah ATM robbery botched despite use of stolen ‘heavy equipment’ to...