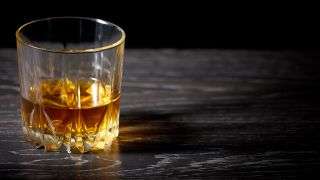 Some rare single malt whiskeys dating to decades ago are worth thousands of dollars — or are they?

If you’ve fantasized about dropping a few thousand dollars on a bottle of rare Scotch, you might want to re-think that investment. Scientists have found that half of the bottles of aged single malts they tested were not as old as their labels suggested.

Rare bottles of vintage Scotch whisky are highly prized by collectors and connoisseurs, and command outrageous prices. As such, counterfeit single malts have become a problem. Enter an unusual solution: Fallout from nuclear bomb tests conducted during the 1950s and 1960s could help experts to detect fake antique whisky.

Nuclear bombs that were detonated decades ago spewed the radioactive isotope carbon-14 into the atmosphere; from there, the isotope was absorbed by plants and other living organisms, and began to decay after the organisms died. Traces of this excess carbon-14 can therefore be found in barley that was harvested and distilled to make whisky.

Carbon-14 decays at a known rate; by calculating the amount of the isotope in a given whisky batch, scientists can then determine if a bottle’s contents were produced after the start of the nuclear age — and if that age matches the date written on the bottle’s label.

Auction sales of rare, single malt Scotch — whisky made of malted barley, produced at a single distillery in Scotland — have skyrocketed in recent years. More than 100,000 bottles were sold at auction in 2018, for a total value of $49 million, the study authors reported. The most expensive bottle, a 1926 Macallan Valerio Adami, sold for more than $1 million.

“This massively increasing interest in the purchase of these rare products as investments has resulted in an accompanying increase in the production of fraudulent products that are difficult to detect,” the scientists wrote.

Techniques such as infrared spectroscopy and chemical analysis can separate genuine whiskeys from fakes by isolating and comparing aspects of their alcohol composition and ratios of volatile compounds. But these methods can’t confirm a whisky’s age, according to the study.

Scientists with the Radiocarbon Lab at the Scottish Universities Environmental Research Centre (SUERC) in Glasgow, Scotland, realized that accurately dating whisky based on the carbon-14 content could be tricky, as harvested barley may be stockpiled for years before being sent to a distillery. The researchers adjusted for that by creating a calibration curve, referencing carbon-14 data from whiskeys with known distillation years from 1950 to 2015.

Then, they evaluated allegedly rare whiskeys from 1847 to 1978, and found that nearly half the bottles weren’t as old as they were supposed to be. One bottle, a Talisker with a label indicating it was distilled in 1863, was likely distilled between 2007 and 2014. A bottle of Ardbeg from 1964 was probably distilled after 1995, and a Laphroaig labeled 1903 dated to 2011 or later.

In other words, despite the hefty price tags that some rare whiskeys command at auction, it would seem that sinking your money into luxury Scotch isn’t as much of a sure thing as you might have hoped, according to the study.

“Our experiences have suggested that there are a significant number of fake products being sold,” the researchers reported.

The findings were published online Jan. 8 in the journal Radiocarbon.