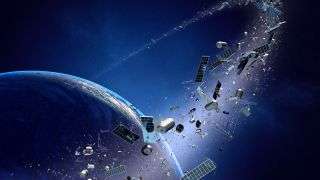 Two defunct satellites nearly collided on Jan. 29, and their close call (the objects missed each other by an estimated 154 feet, or 47 meters) renewed attention for a growing problem far above Earth: a cloud of space junk.

Millions of objects make up this orbiting junkyard, where hurtling fragments can reach speeds of nearly 18,000 mph (19,000 km/h), around seven times faster than the speed of a bullet, according to NASA. About 500,000 pieces of debris are at least marble size, and approximately 20,000 objects are the size of a softball or bigger, NASA reported in 2013.

Adding to the clutter is the proliferation of miniature satellites called cubesats. These 4-inch-long (10 centimeters) cubes weigh just 3 lbs. (1.4 kilograms) and launch costs start at $40,000; private companies commission them by the thousands to gather data and provide internet and radio service, according to Los Alamos National Laboratory.

With this buildup of space congestion, aerospace engineers are racing to develop technologies and systems that can prevent crashes in order to protect working satellites, future space missions, and people and property on the ground, Los Alamos experts told Live Science.

Approximately 5,000 satellites carry payloads into orbit around our planet, but only around 2,000 are active and communicating with Earth, said David Palmer, a Los Alamos space and remote-sensing scientist.

“Currently, when something is launched — and a launch can release 100 or more satellites — the operators and the space surveillance people have to track every piece of space hardware that is released by the rocket and determine individually which piece is which,” he told Live Science

Palmer is the principal investigator for a project developing a type of electronic license plate for satellites. This will allow orbiters to broadcast their owners and positions for as long as they’re in space, even after the satellite ceases to function.

The so-called license plate is about the size of a Scrabble tile, small enough to be carried by even tiny cubesats. Dubbed the extremely low-resource optical identifier, or ELROI, it produces a unique identifying code — a satellite license number — with a laser that blinks 1,000 times per second. Patterns created by the blinks translate into serial codes that can be read by telescopes on the ground, identifying a satellite’s owner  and coordinates.

Because ELROI is powered by its own solar cell, it can keep “talking” to Earth after the end of the satellite’s life span. And because ELROI is small and lightweight and requires no external power, it can easily be attached to pieces of space hardware that don’t have radio transmitters, such as the rockets that launch satellites into space and wind up as free-floating junk.

By providing trackable data for individual objects in the ever-increasing cloud of space debris, ELROI could play a critical role in heading off collisions. It could even monitor radio transmissions in working satellites and alert operators when communication is disrupted, Palmer said.

“Beyond its identification function, it can also be used as a low-bandwidth diagnostic function. So that will also help to reduce the amount of broken satellites in space,” he added. “License plate technology is only part of the solution — but it’s an important part.”

When rockets launch satellites into orbit, they typically burn out all their fuel at once. However, filling rockets with a type of fuel that can be repeatedly reignited could give ground operators yet another option for keeping satellites safe from space crashes, Los Alamos research engineer Nick Dallmann told Live Science.

“What we’ve been working on here at Los Alamos is making a solid rocket [one that uses solid fuel] where you can start it, stop it and then restart it again,” said Dallmann, a project leader for the development of this novel method. Being able to reignite a rocket’s fuel even after a satellite achieves orbit could enable space hardware to shift course in order to avoid a potential collision, he explained.

Since the 1960s, scientists have known that rapidly decompressing the combustion chamber in a solid-fuel rocket could extinguish the burn after ignition. For Dallmann and his colleagues, the challenge was to create a reusable ignition system combined with a mechanism to rapidly decompress the fuel chamber.

Another challenge was how to reignite the fuel, as igniters are typically destroyed by the first burn. To solve that, the scientists decided not to use the conventional pyrotechnic igniter. Instead, they experimented with separating water into hydrogen and oxygen within the combustion chamber and then ignited them using an electrode to generate a spark. Then, the researchers extinguished the burn through decompression.