Home Strange news Guys, live cannonballs are not recyclable. Ask me how I know./recycled-civil-war-cannonball.html 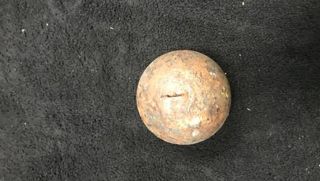 Workers at the recycling center found the cannonball on the processing line.

A recycling center in Michigan was recently evacuated after someone tried to recycle a Civil War cannonball.

Officials with the police and fire departments in Grand Rapids, Michigan, received a call on May 19 that a cannonball dating to the Civil War had been discovered on the processing line at the Kent County Recycling Center, a representative with the county’s  Department of Public Works told Live Science in an email.

After inspecting the cannonball, authorities determined that it was “live ordnance” filled with gunpowder and capped with a detonator, and the premises were promptly evacuated.

A police report described the object as measuring 6 inches (15 centimeters) in diameter and weighing about 6 lbs. (3 kilograms), the Detroit Free Press reported.

“The Michigan State Police Bomb Squad responded, and it was safely removed from the property,” the Public Works representative told Live Science. “There were no injuries and work at the Recycling Center resumed normally on Wednesday, May 20.”

In case the lesson from this incident was unclear to Grand Rapids residents, Kent County Commissioner Phil Skaggs posted a firm reminder on Facebook that people should follow instructions about recycling.

“Just to be clear: DO NOT RECYCLE CANNONBALLS FROM ANY WAR!” Skaggs wrote.

Even “beyond cannonballs,” items that can pose a hazard to workers should never be recycled, such as ammunition, propane tanks and syringes, the Public Works representative added in the email.

It is unknown if the person who dropped off the cannonball in Michigan acted alone. But during the Civil War, loading and firing a cannon was a team effort that took as many as 10 people to accomplish, according to the American Battlefield Trust, a nonprofit that preserves historic battlegrounds.

Michigan officials were wise to be cautious about handling the discarded cannonball; though the Civil War ended more than 150 years ago, explosive weapons from that era can still be dangerous. In 2008, a Civil War hobbyist in Virginia named Sam White died while restoring a 75-lb. (34 kg) cannonball in his driveway. The sphere exploded, killing White and blasting shrapnel onto the porch of a neighbor’s house about a quarter-mile (half a kilometer) away, CBS News reported that year.

More recently, in 2016, Hurricane Matthew uncovered a pile of 16 Civil War cannonballs on a beach in South Carolina; authorities determined that many “contained old and very unstable gunpowder,” and the weapons were destroyed with the help of the U.S. Air Force Explosive Team, Live Science previously reported.

Bible news: How ‘man who inspired Jesus’ was exposed in ancient stone