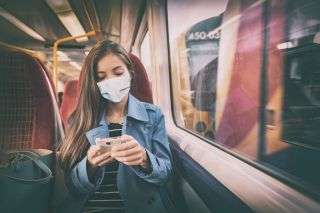 The chances of catching COVID-19 on public transportation depend a lot on where you sit, with those closest to an infected person at the highest risk and those farther away at a relatively low risk, a new study suggests.

The study, which included thousands of passengers who traveled on China’s high-speed trains, known as G trains, found that the rate of transmission to nearby passengers varied from near 0% to about 10%, with those who sat closest to infected passengers for the longest periods at the highest risk.

“Our study shows that although there is an increased risk of COVID-19 transmission on trains, a person’s seat location and travel time in relation to an infectious person can make a big difference as to whether it is passed on,” study lead author Dr. Shengjie Lai, a research fellow at the University of Southampton in the United Kingdom, said in a statement. “The findings suggest that during the COVID-19 epidemic it is important to reduce the density of passengers and promote personal hygiene measures, the use of face coverings and possibly carry out temperature checks before boarding.”

Indeed, other recent studies from around the world suggest that when passengers wear masks and adhere to social-distancing guidelines, public transportation may pose a relatively low risk of infection.

For example, in Paris, public health officials found that of the 386 recent clusters of COVID-19 in the city between May and mid-July, none were linked with public transportation, according to The New York TImes. Similar findings were seen in both Tokyo and parts of Austria, the Times reported.

In the new study, published July 29 in the journal Clinical Infectious Diseases, researchers analyzed information from passengers who traveled on G trains between mid-December 2019 and late February 2020, which covers the period from before COVID-19 was identified to the peak of the outbreak in China.

The researchers identified more than 2,300 passengers known as “index patients” who developed COVID-19 within 14 days of their train trip, and more than 72,000 passengers who sat near these cases — within three rows (widthwise) and five columns (lengthwise) of the index patients.

Overall, 234 of the 72,000 nearby passengers developed a COVID-19 infection linked to their train ride. That means the average “attack rate” — or percent who tested positive out of the overall group — was about 0.32%.

Those who sat directly next to an infected person had the highest risk of contracting the infection, with an average attack rate of 3.5%.

But after an infected person disembarked the train, those who sat in the same seat seemed to be at a low risk of infection. Among the 1,342 people who sat in a seat previously occupied by an infected person, just one person later contracted the disease, an attack rate of just 0.075%, according to CTV News.

The researchers concluded that to prevent COVID-19 spread, passengers should be seated at least two seats apart within the same row, and limit travel time to 3 hours.

“We hope it can help to inform authorities globally about measures needed to guard against the virus and in turn help to reduce its spread,” said study co-author Andy Tatem, a professor of spatial demography and epidemiology at the University of Southampton and director of WorldPop, a collaboration of scientists that works to provide data on human population distributions.

The authors noted that their study had limitations. For example, the researchers could not prove that the 234 passengers definitely contracted the virus on the train, although public health officials had determined that this was the most likely source of their infection, CTV News reported. In addition, the study did not have information on whether the passengers were wearing protective gear such as masks, the authors said.

Loch Ness Monster ‘spotted’ in rare video – but blink and...