Scientists have tried to hear signals from extraterrestrial civilizations that could be coming from the 144 planets at the center of our galaxy. With one of the most sensitive radio telescopes Murchison Widefield Array, which is located in Australia, scientists have listened to the space for the fourth time in search of technosignatures — signals that should be sent into space by aliens. This time, astronomers directed a radio telescope to the center of the Milky Way, where 144 exoplanets and billions of stars were found, Cnet reported.

But like the previous three times, astronomers heard nothing. Nothing that resembled signals from extraterrestrial civilizations.

“We were looking for long sustained signals that could be technosignatures, that is, signals being transmitted into space by aliens. But, as in past attempts, we heard nothing of the sort. Although, maybe aliens are using other technology to transmit signals?” said Chenoa Tremblay of the SETI Institute, California, USA.

Astronomers were looking for signs of intelligent life at the center of the Milky Way using the Murchison Widefield Array radio telescope, which consists of 4,096 spider antennas and is located in Australia. These antennas can pick up low-frequency radio waves from space.

This is the fourth time scientists have used this radio telescope to search for aliens. In 2020, they “tapped” a section of the galaxy with 10 million stars, in 2018 they studied the Orion Nebula, and it all started back in 2013, when they first pointed the radio telescope toward the center of the Milky Way.

According to Tremblay, the new search was different from the others. Now the scientists were looking for possible signals that could come from 144 exoplanets. Last time there were only 38.

The center of our galaxy has the highest density of stars, so if you look for intelligent life, it’s best there, scientists say.

“Where there are many stars, there may be planets, and there may be life on the planets. It is believed that habitable worlds are most likely concentrated in the center of the galaxy,” Tremblay says.

According to the scientist, the exact number of stars that were covered by the search is difficult to call. Preliminary estimates are about 3 million stars.

“But there are billions of star systems out there, and we only covered a drop in the cosmic ocean with our search,” Tremblay says.

Scientists first searched for technosignatures at 155 MHz to avoid interference from Earth. The Murchison Widefield Array radio telescope is currently undergoing upgrades, and perhaps in the future it can improve its technical “skills,” which scientists plan to use to search for extraterrestrial life in other parts of the Milky Way. 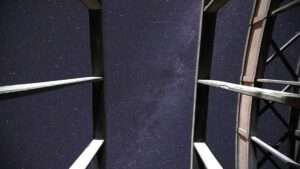