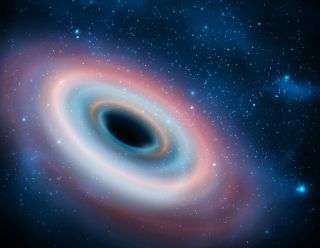 Physicists may finally have figured out how fast a black hole visible in our Milky Way is spinning, and in doing so gotten closer than ever to figuring out everything there is to know about a certain class of these dark behemoths.

The singularity, named 4U1543-4, orbits a star about 24,700 light-years from Earth. It’s one of just a few similar objects that scientists have found in our region of space, and, at 9.4 times the mass of our sun, is not a supermassive black hole. Most physicists believe black holes, having crushed all their mass down to a single point, are identical except for three numbers: their mass, their charge and their spin. And while in theory a black hole could be very positively or negatively charged if it were made solely of electrons or protons, in the real world black holes (like all massive objects in the universe) probably have a net zero charge. Now, it seems like researchers have managed to make a pretty good measurement of this black hole’s spin.

Like anything in space, the compressed singularity hidden behind a black hole’s event horizon — the point beyond which not even light can escape — spins freely with all the momentum it’s picked up over the eons. But unlike with stars and planets, there’s no way to directly observe how fast the heavy point in space is spinning.

Instead, astronomers rely on proxies: the whirling clouds of matter just outside a black hole’s event horizon, which are tugged along by the singularity’s spin. By determining how fast that matter is moving, they can estimate the angular momentum, or spin, of the singularity itself.

Of course, being 24,700 light-years away these clouds of gas aren’t clearly visible. So astronomers don’t have the option of watching a speck of dust complete a circuit around the black hole’s event horizon. Instead, they measure the glow of X-rays produced close to the event horizon as the swirl of dust and gas surrounding the event horizon accelerates to extreme speeds. And that glow reveals how fast the gas and dust are moving, which in turn offers information about the singularity itself.

Two previous attempts to measure 4U1543-4’s spin led to wildly inconsistent results. This new approach relied on data from a particular flaring event, when the material around the black hole got much brighter, and also used improved techniques for calculating the spin.

Astronomers describe a black hole’s rate of spin with numbers between -1 and 1. A black hole not spinning at all has spin 0 a*, and black holes also have maximum spin speeds, which top out as they approach 1 a* or -1 a*.

This black hole, the researchers found, likely has a spin of 0.67. There are wide error bars around the estimate, which could top out at 0.82 or dip as low as 0.59. But regardless, the researchers wrote in their paper, its rate of spin is «moderate» for a black hole of this mass.

The paper describing these results was published March 5 in the journal Monthly Notices of the Royal Astronomical Society, and is available on arXiv.