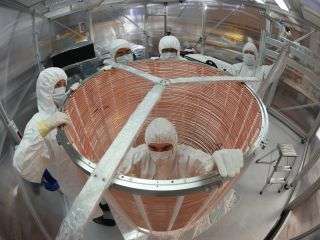 A team works on assembling the XENON1T dark matter experiment..

A team of physicists has made what  might be the first-ever detection of an axion.

Axions are unconfirmed, hypothetical ultralight particles from beyond the Standard Model of particle physics, which describes the behavior of subatomic particles. Theoretical physicists first proposed the existence of axions in the 1970s in order to resolve problems in the math governing the strong force, which binds particles called quarks together. But axions have since become a popular explanation for dark matter, the mysterious substance that makes up 85% of the mass of the universe, yet emits no light.

If confirmed, the axions that may have been detected wouldn’t fix the asymmetries in the strong force or explain most of the missing mass in the universe, said Kai Martens, a physicist at the University of Tokyo who worked on the experiment. These axions, which appear to be streaming out of the sun, don’t act like the “cold dark matter” that physicists believe fills halos around galaxies. And they would be particles newly brought into being inside the sun, while the bulk of the cold dark matter out there appears to have existed unchanged for billions of years since the early universe.

And it’s not certain that axions were detected at all. Despite two years of data collection, the hint of a signal is still faint compared to what physics requires to announce the discovery of a new particle. Over time, as more data comes in, Martens told Live Science, it’s still possible that the evidence of a signal may fade away to nothing.

Still, it sure seems like there was a signal. It turned up in a dark underground tank of 3.5 tons (3.2 metric tons) of liquid xenon — the XENON1T experiment based at the Gran Sasso National Laboratory in Italy. At least two other physical effects could explain the XENON1T data. However, the researchers tested several theories and found that axions streaming out of our sun were the  likeliest  explanation for their results.

Physicists who weren’t involved in the experiment have not reviewed the data as of the announcement at 10 a.m. ET today (June 17). Reporters were briefed on the finding before the announcement, but data and paper on the find were not made available.

“If this bears out, and *if* is a big question, this is the biggest game changer in my corner of physics since the discovery of cosmic acceleration,” Chanda Prescod-Weinstein, a physicist at the University of New Hampshire who is not part of the collaboration, told Live Science in an email.

(The discovery of cosmic acceleration in 1998 showed that not only is the universe expanding, but that rate of expansion is getting faster.)

The XENON collaboration watches for tiny flashes of light in dark, insulated xenon tanks — of which XENON1T, operated between 2016 and 2018, is the largest example yet.

Shielded underground from most radiation sources, only a handful of particles (including dark matter) might make their way into the tank and collide with the atoms in the liquid within, stimulating those flashes. Most of those flashes are easy to explain, the results of interactions with particles physicists already know about. Despite the laboratory’s underground shielding, all sorts of particles make their way down there and account for most of what XENON detectors see. XENON researchers look for “excess” flashes, more flashes than you would predict based on known particle physics, that might suggest the existence of new particles.

This is the first time a XENON detector has actually detected an excess, a spike in activity at a low-energy range that matches what physicists would expect if solar axions do exist.

Until now, XENON results have partially ruled out another type of dark matter candidate, the “weakly interacting massive particles” (WIMPS). It didn’t detect enough flashes at the energy levels most WIMPs would produce to back up their existence, effectively ruling out most possible varieties of WIMP. But the experiments haven’t turned up any evidence for new particles before.

“Although the WIMP has been the dominant DM [dark matter] paradigm for many years, the axion has been around about as long, and recent years have seen a surge in experiments looking for axions,” said Tien-Tien Yu, a physicist at The University of Oregon, who also wasn’t involved in the XENON experiment.

So, if confirmed, the axion detection would fit neatly with recent developments in dark matter research (including older XENON data) that have made the once-popular WIMPs seem like long shots.

However, Yu told Live Science that it isn’t convincing on its own.

“It would be exciting if it were true, but I am skeptical as there could be some previously unconsidered source of background,” she said. (It’s also hard to evaluate the data without seeing it, she added.)

For instance, some radioactive source might have tripped XENON1T’s sensors in ways that mimic the expected patterns of solar axions interacting with liquid xenon.

Yu pointed out that there have been unconfirmed claims of dark matter particle discoveries before. And the “solar axions” that XENON may have found don’t appear to represent true cold dark matter (which would have originated in the early universe and be “cold”), but rather hot axions produced in our sun.

(Martens said this was true, but that solar axions — which would still be never-before-detected massive particles ghosting through the universe — would still count as dark matter in many respects. He acknowledged though that they wouldn’t explain that huge bulk of missing mass.)

The XENON collaboration itself proposed three possible explanations for the effect, which it described as an “excess” of events at low energies inside the tanks.

The best fit for the excess they saw, XENON said, was indeed solar axions. They expressed a “3.5 sigma” confidence in that hypothesis.

That means, Martens said, that there’s about a 2 in 10,000 chance that random background radiation produced the signal as opposed to solar axions themselves. Typically, physicists only announce a “discovery” of a new particle if the results reach 5 sigma significance, meaning a 1 in 3.5 million chance that the signal was produced by random fluctuations.

The other possibilities they considered were less convincing, but still worth taking seriously.

There might have been undetected traces of radioactive tritium (a version of hydrogen with two neutrons) in XENON1T, causing the surrounding liquid to sparkle. The XENON team worked hard to avoid this sort of noise from the beginning, Martens said. Still, he said, the tiny levels of tritium in question here would be impossible to perfectly screen out. And with XENON1T now taken apart to build a bigger future experiment, it’s impossible to go back and check.

The tritium hypothesis fits the data to a confidence level of 3.2 sigma. Joey Neilsen, a physicist at Villanova University in Pennsylvania, who is not involved in XENON, said that corresponds to about a 1 in 700 chance that random fluctuations would have produced the signal.

It’s also possible that neutrinos — faint, known particles from the sun that also stream through Earth — interact more strongly with magnetic fields than expected. If that’s true, according to a statement from the XENON collaboration, neutrinos could explain the signal they’re seeing. This hypothesis also comes with a 3.2 sigma confidence level, they wrote.

But even if  neutrinos explain XENON’s result, the Standard Model of particle physics would have to be rearranged to explain the unexpected neutrino behavior, Yu pointed out.

One telltale clue would suggest whether the solar axions hypothesis should be taken seriously: seasonal changes in the data, Yu said.

“If the signal were indeed from solar axions, one would expect a modulation in the signal due to the relative position of the sun to the Earth,” she said.

As our planet gets a bit more distant from the star it orbits, the solar axion stream should weaken. As Earth gets closer to the sun, Yu said, the signal should get stronger.

Martens said that no seasonal variation is visible in the XENON1T signal. The signal is too faint, and the experiment ran too briefly at just two years, for XENON1T to have picked it up.

Physicists will likely treat the XENON1T results as preliminary for the near future. An upcoming, larger XENON experiment called XENONnt, still under construction in Italy, should offer clearer statistics once completed, the team said. Further experiments underway or under construction in the United States and China will add to the existing data.

One hope, Martens said, is that seasonal variation will emerge from the data when the more sensitive XENONnt’s detector has finished its e 5-year run. That would strongly stack the deck in favor of solar axions, he said. And then all the international experiments might combine their raw xenon (drawing on a substantial chunk of the global supply) to build a 30-ton (27 metric tons) detector. Maybe then it will be possible to study this signal in detail (if it’s real) or detect other dark particles.

So these results are still preliminary. Still, Prescod-Weinstein said, there’s been plenty of buzz in the physics community in advance of the announcement.

“If this bears out, this is a big deal,” she wrote. “I’m hesitant to commentate on the strength of the data without having time to examine the results and discuss with peers. Of course I’d prefer a 5 sigma result!”

End of the world: Hurricane Laura is a biblical sign of...

End of the world: Bible’s ‘hidden’ 2021 doomsday prophecy exposed after...