Home Space and Ufo How often do earthquakes on Mars occur and how do we know... 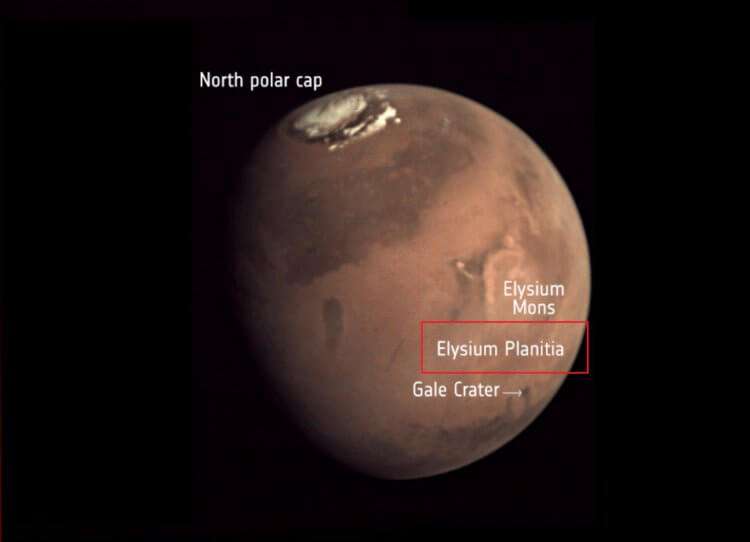 Every year about 100,000 earthquakes are recorded on our planet. About a hundred of them cause countless devastation and even human deaths, but most go unnoticed. Earthquakes are usually caused by the movement of tectonic plates deep beneath us. Surface tremors occur even on Mars and are currently being studied by InSight. It landed on the surface of the distant planet in November 2018 and has been trying for two years to help scientists learn details of its internal structure. The first earthquakes on Mars was recorded in April 2019. Since then, the SEIS seismometer on the rover has recorded another 480 tremors, but they were all very weak. The researchers drew some interesting conclusions from this data. So, let’s add a few more interesting things to our knowledge of Mars?

The InSight rover is currently working in the Elysium Highlands. As part of its mission, the instrument is studying the internal structure of Mars and the atmospheric conditions of the planet. To penetrate the planet’s depths, it uses the HP3 probe, which was stuck to a rock 30 centimeters deep in March 2019, and then scientists tried to rescue it with a robotic arm. In addition, the rover’s equipment includes weather sensors, cameras, and a RISE device to determine the density of Mars’ core. But for the purposes of this article, we are interested in the SEIS seismometer, which can record earthquakes.

The seismometer has been operational since April 2019 and has since recorded 480 earthquakes. There have been no devastating tremors for two years, just tiny vibrations. They are very common on our planet, and we don’t even notice them. And there has never been any indication of strong rumors about Mars. American scientists have sent many spacecraft to Mars in the last 50 years, and not a single one has flipped on its side because of a strong earthquake. Therefore, scientists tend to believe that Mars is a much calmer planet than Earth. But some researchers believe that this is just a temporary period of rest. He talked about all of this on NASA’s website.

It’s important to note that the SEIS seismometer recorded earthquakes on Mars frequently in 2019. But at the end of June this year, their number decreased significantly. In September, the instrument recorded only five seismic activity. Perhaps earthquakes are indeed seasonal. But they can happen, but the InSight rover just doesn’t notice them. After all, there is a seasonal shift on Mars right now, accompanied by strong winds. These tremors can create natural vibrations on the surface of Mars and disrupt the seismometer.

The structure of Mars

Earthquakes usually occur at great depths or closer to the surface. By studying the nature of earthquakes at the surface, scientists can learn a great deal about the structure of our planet. The leaders of the InSight missions hoped that the depths of Mars could also be explored by surface tremors. In this way, they wanted to study the depth of at least 400 kilometers. However, the seismometer SEIS has not registered any surface shocks so far, which means that all earthquakes occur deep in the planet.

Fortunately, even with deep tremors, the researchers were able to draw an interesting conclusion. Scientists previously suspected that the surface layer of Mars, also called the crust, consists of several layers. Now there is reason to say that the crust of Mars consists of three layers. At least this is indicated by the properties of Earthquakes. If the crust is two-layered, it should be about 20 kilometers thick. If it has three layers, it is about 37 kilometers thick. This is exactly what can be said in the later work of the InSight device.

Greenland ice melt has passed the point of no return