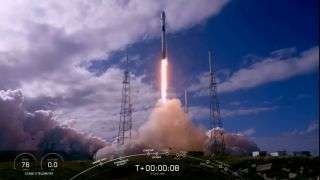 SpaceX will launch 60 new Starlink internet satellites into orbit on a used rocket today (April 22) and you can watch it all live online.

A veteran Falcon 9 rocket is scheduled to launch SpaceX’s Starlink 6 mission the historic Launch Pad 39A of NASA’s Kennedy Space Center in Florida at 3:30 p.m. EDT (1930 GMT). The rocket’s first-stage booster has flown three times before.

You can watch the Starlink launch live here and on the Space.com homepage, courtesy of SpaceX. You can also watch the launch directly via SpaceX’s webast page here. SpaceX webcasts usually begin about 15 minutes before liftoff.

Despite its name, Starlink 6 is actually the seventh batch of satellites to launch into space for SpaceX’s growing broadband internet megaconstellation. The company launched its first Starlink flight in May 2019, with a second flight last November and four more since January of this year.

Currently, SpaceX has 360 satellites in orbit. The Starlink 6 mission will boost that number to 420.

SpaceX’s Starlink satellite network is a megaconstellation designed to provide fast and affordable internet access to people around the world, particularly in remote or under-served locations. The satellites connect to a ground box to link users to the internet. SpaceX CEO Elon Musk demonstrated the technology last year.

With Starlink 6, SpaceX will surpass that 400-satellite target. SpaceX President Gwynne Shotwell has said that Starlink service would likely begin in 2020.

As is typical for SpaceX launches, Starlink 6 features several components making a return trip to space. The Falcon 9 first-stage booster has launched three missions, including SpaceX’s Crew Dragon spacecraft test flight in March 2019, a three-satellite mission for Canada later that year and the fourth Starlink launch in early 2020.

The mission’s payload, the two-piece nosecone that protects the Starlink satellites during launch, is also fully reused. One half of the fairing was captured by a SpaceX recovery boat equipped with a giant net, while the other was fished out of the sea from a previous flight. Reusing payload fairings can save at least $6 million per flight, SpaceX has said.

Today’s mission will mark SpaceX’s third flight to feature recycled payload fairings and the fifth time a Falcon 9 booster has made a fourth flight.

Editor’s note: This story has been updated to reflect a new 3:30 p.m. EDT launch time for SpaceX’s Starlink satellites.