Home Space and Ufo Is our solar system shaped like a deflated croissant? 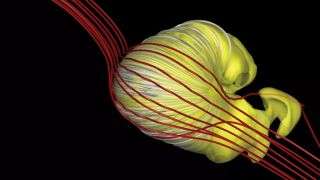 An updated model suggests the shape of the sun’s bubble of influence, the heliosphere (seen in yellow), may be a deflated croissant shape, rather than the long-tailed comet shape suggested by other research.

Our solar system’s protective bubble may not be comet-shaped after all.

Scientists have traditionally posited that the heliosphere, the huge bubble of charged particles that the sun blows around itself, has a rounded leading edge, where the solar system barrels through space, with a long tail streaming behind it. But the heliosphere’s true shape is weirder and more complex, a recent study suggests — something akin to a deflated croissant.

It’s tough to map out the heliosphere, because its closest edge is still a whopping 10 billion miles (16 billion kilometers) from Earth. Just two spacecraft, NASA’s Voyager 1 and Voyager 2 probes, have directly sampled the boundary, and two data points are far from sufficient to outline the heliosphere’s contours.

So scientists have done so by other means. For example, they’ve studied measurements of galactic cosmic rays, super-energetic charged particles that zoom into our neighborhood from very far away. Researchers have also carefully tracked «energetic neutral atoms» that bounced sunward after interacting with the interstellar medium, the vast cosmic sea that lies beyond the heliosphere.

Such tracking has been done by a variety of spacecraft, including NASA’s Interstellar Boundary Explorer and the Cassini Saturn probe. Scientists feed this information into computer models, which use it to map out the heliosphere’s shape.

The recent study takes a new look at such data and also includes measurements of «pick-up ions» made by NASA’s New Horizons Pluto probe, which is currently more than 4.3 billion miles (6.9 billion km) from Earth.

Pick-up ions are carried along by the solar wind, the stream of charged particles flowing continuously from the sun. (This flow is blocked by the interstellar medium to form the boundary of the heliosphere.) Pick-up ions are much hotter than the particles that make up most of the solar wind, which contributes to the heliosphere’s weird shape, study team members found.

«If you have some cold fluid and hot fluid, and you put them in space, they won’t mix — they will evolve mostly separately,» Opher said. «What we did was separate these two components of the solar wind and model the resulting 3D shape of the heliosphere.»

That shape, they determined, is croissant-like: a curving central bulge with two jets curling away from it.

«Because the pick-up ions dominate the thermodynamics, everything is very spherical,» Opher said. «But because they leave the system very quickly beyond the termination shock, the whole heliosphere deflates.»

The termination shock is the heliosphere boundary region, where solar wind particles begin pressing into the interstellar medium and slow to less than the speed of sound.

Gaining a better understanding of the heliosphere’s shape has multiple applications, Opher and her colleagues said. For example, the bubble blocks about 75% of galactic cosmic rays, which can damage spacecraft and the DNA of voyaging astronauts. Knowing in detail which regions of space are protected could aid mission planners. (Life on Earth doesn’t have much to worry about from galactic cosmic rays; our planet’s magnetic field and atmosphere provide effective shielding.)

The study was published in March 2020 in the journal Nature Astronomy.