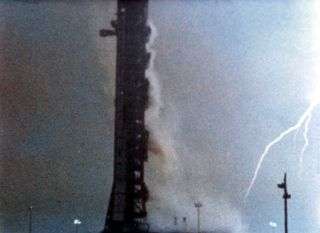 Here, an image of the launch-triggered lightning that struck the Apollo 12 rocket.

SAN FRANCISCO — When NASA’s Apollo 12 rocket launched from Kennedy Space Center in Florida on Nov. 14, 1969, the sight was electrifying — and not in a good way.

Moments after liftoff, at 36.5 seconds and at 52 seconds, two bolts of lightning triggered by the launch struck the rocket. Systems onboard Apollo 12 were thrown offline, but disaster was averted thanks to the quick thinking of NASA engineers and astronauts, who deftly responded to an emergency they had never anticipated or practiced in any training simulation.

The Apollo 12 incident sparked new research into the causes of launch-triggered lighting to better understand the cause and to ensure the safety of future missions, researchers told a rapt audience on Wednesday (Dec. 11) at the annual meeting of the American Geophysical Union (AGU).

Philip Krider, a professor emeritus at the University of Arizona, served for more than 50 years on an expert panel created by NASA to investigate lightning discharges triggered by launches. Prior to Apollo 12, lightning’s potential impact on space vehicles was considered only during the window prior to launch, scientists wrote in an official analysis of the incident prepared for NASA in February 1970.

In fact, “the possibility of the vehicle becoming involved with lightning after liftoff was not a launch consideration, unless natural lightning activity was actually present in the launch complex area,” the analysis said. The idea that the vehicle itself could generate lightning was unheard of, according to the report.

At the AGU meeting, Krider described the event that took place 50 years ago.

“They launched the vehicle into a weakly electrified environment associated with a weak cold front passing right over the space center,” Krider said. The launch first triggered a cloud-to-ground lightning discharge, setting off warning lights and alarms in the crew compartment of the spacecraft. Communications were interrupted, instruments and clocks went haywire, and all three fuel cells disconnected. The second lightning strike stayed in the cloud and had no ground contact, but it shut down the rocket’s navigation system, said Krider.

“I don’t know what happened here. We had everything in the world drop out,” commander Pete Conrad said to mission control at the time.

“They had never practiced such a catastrophic electrical failure,” Krider said. “All the circuit breakers in the spacecraft were flashing red — it was really a bad thing from their point of view.”

Analysis later showed that the cold front’s current, though too weak to produce natural lightning, was strong enough for the rocket and its ionized, electrically conductive exhaust plume to produce a charge and generate two lightning strikes, scientists wrote in the 1970 report.

On the ground at NASA mission control, flight controller John Aaron realized that the disrupted readout on his screen resembled one he had seen in a flight simulation, the data similarly scrambled by a voltage interruption. He recommended switching the rocket’s signal conditioning equipment (SCE) to auxiliary, which would reset the system. Fortunately, lunar module pilot Alan Bean knew exactly where that switch was, and soon the system was reset and the fuel cells were back online.

“And then, Alan Bean, when they were in Earth orbit, was able to realign the inertial platform manually using a practice procedure,” Krider said.

The Apollo 12 emblem was a sailing ship, the “Yankee Clipper.” Upon the astronaut’s safe return, NASA mission control updated its display of the emblem to include the words “Damn the lightning, full speed ahead!” And Aaron’s simple but effective solution — “Try SCE to AUX” — is now a popular nerdy catchphrase that can be found on mugs and T-shirts, Krider said at AGU.

Over the years that followed, significant changes were made to rocket launch protocols. Meanwhile, close collaboration between NASA’s mission control engineers and meteorologists pinpointed weather conditions that could prove electrically hazardous to spacecraft, James Dye, a scientist at the National Center for Atmospheric Research and a longtime member of NASA’s lightning advisory panel, said at AGU.

Does this mean that rockets never generate lightning anymore? Not quite. On May 27, a Russian Soyuz rocket launch set off a powerful lightning flash, “so triggered lightning is still a hazard,” Dye said. However, a number of environmental factors during the Russian launch strongly suggested that there was a risk of lightning prior to liftoff, he said as he highlighted images of the launch during the AGU presentation.

“You can see that the background is very cloudy, dark and overcast, rainy. There were also indications on the ground that there were strong electric fields. In reality, it shouldn’t have been launched,” Dye said.

Woman falls out of back of ambulance – but paramedics don’t...