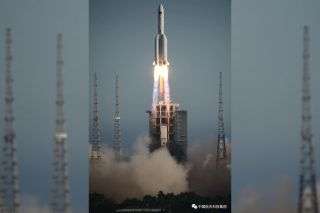 The bulky Long March 5B became the heaviest orbiting thing to fall uncontrolled to Earth in nearly three decades, according to Jonathan McDowell, a Harvard astrophysicist and orbital object tracker. The last time a heavier object had an uncontrolled entry was 1991, when the 43-ton (39,000 kg) Salyut-7 Soviet space station reentered the atmosphere over Argentina, McDowell wrote on Twitter. (Another contender he mentioned: the 2003 shuttle Columbia disaster, though that reentry did not become uncontrolled until the space shuttle was already in the atmosphere over Texas.)

In July 2019, the Chinese space station Tiangong-2 fell in a controlled descent through Earth’s atmosphere. But that 9.5-ton (8,600 kg) crash was less than half the size of today’s descent, and it was guided remotely using the last of its fuel to land in a specific, remote bit of ocean. In 2018, that space station’s predecessor,  the 9.3-ton (8,500 kg) Tiangong-1, fell uncontrolled (but harmlessly) into the Pacific ocean.

The 18th Space Control Squadron, an Air Force space-tracking group, reported that Long March 5B reentered the atmosphere at 11:33 a.m. EST. At that time, it was just off the west coast of Africa, approaching Nouakchott, Mauritania. In the rocket’s last half-hour in orbit, it passed over Hollywood, Colorado Springs and New York City’s Central Park, according to McDowell.

The rocket’s uncontrolled reentry path was largely determined by the last few days of space weather, McDowell said. Particles streaming from the sun can create drag and perturb the path of such a fast-moving piece of debris in ways that make its passage difficult to predict.