Home Space and Ufo No One Can Agree How Fast Universe Is Expanding. New Measure Makes... 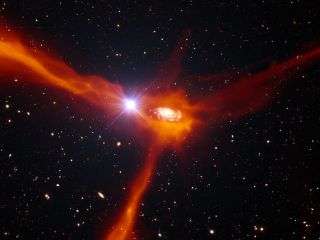 An artist’s impression of a quasar. New measurements of the universe’s expansion have relied on the gravitational lensing of light from six quasars.

HONOLULU — A crisis in physics may have just gotten deeper. By looking at how the light from distant bright objects is bent, researchers have increased the discrepancy between different methods for calculating the expansion rate of the universe.

«The measurements are consistent with indicating a crisis in cosmology,» Geoff Chih-Fan Chen, a cosmologist at the University of California, Davis, said here during a news briefing on Wednesday (Jan. 8) at the 235th meeting of the American Astronomical Society in Honolulu.

At issue is a number known as the Hubble constant. It was first calculated by American astronomer Edwin Hubble nearly a century ago, after he realized that every galaxy in the universe was zipping away from Earth at a rate proportional to that galaxy’s distance from our planet.

This does not mean that Earth is at the center of the cosmos. Instead, the finding told scientists that the universe is expanding and that there is a direct relationship between how far apart two objects are and how fast they are receding from one another. The Hubble constant has a value that incorporates this speed-distance connection.

The problem is that, in recent years, different teams have disagreed over what exactly this constant’s value is. Measurements made using the cosmic microwave background (CMB), a remnant from the Big Bang that provides a snapshot of the infant universe, suggest that the Hubble constant is 46,200 mph per million light-years (or, using cosmologists’ units, 67.4 kilometers/second per megaparsec).

But by looking at pulsating stars known as Cepheid variables, a different group of astronomers has calculated the Hubble constant to be 50,400 mph per million light-years (73.4 km/s/Mpc).

The discrepancy seems small, but there is no overlap between the independent values and neither side has been willing to concede major mistakes in its methodology.

The new measurement, made by the H0 Lenses in COSMOGRAIL’s Wellspring (H0LICOW) collaboration, was an attempt to calculate the Hubble constant in a completely novel way. (COSMOGRAIL is the acronym for Cosmological Monitoring of Gravitational Lenses.)

This measure uses the fact that massive objects in the universe will warp the fabric of space-time, meaning that light will bend as it travels past them. Superluminous, black-hole-powered entities called quasars are sometimes found behind large foreground galaxies, and their light gets warped by this bending process, which is known as gravitational lensing.

Using the Hubble Space Telescope, the H0LiCOW team studied the light from six quasars between 3 billion and 6.5 billion light-years away from Earth. As the quasars’ black holes gobbled material, their light would flicker.

The intervening gravitationally lensing galaxy bent each quasar’s light, and so the quasar’s flickering arrived at Earth at different times depending on what path it took around the foreground galaxy, Chen said. The length of the time delay provided a way to probe the expansion rate of the universe, he added.

H0LiCOW was able to derive a value of the Hubble constant of 50,331 mph per million light-years (73.3 km/s/Mpc), extremely close to that provided by Cepheid variables but quite far from the CMB measurement.

«The consequence is the tension is very well likely real,» Chen said and probably not the result of errors in the methods of each approach.

It’s worth noting that last year another independent measurement of the Hubble constant, made using giant red stars, came squarely between the two sides, calculating a value of 47,300 mph per million light-years (69.8 km/s/Mpc).

Nevertheless, Chen said, the different numbers are far enough apart that it’s possible there is something wrong in our models of the universe. A growing number of physicists are acknowledging this, he added, because the independent measurements continue to disagree. Researchers might have to come up with new physics to explain what’s going on.

How the pandemic upended our perception of time

What would happen to Earth if humans went extinct?