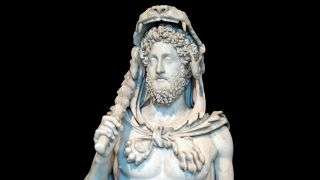 Commodus reigned as emperor of Rome from A.D. 177 until his death in 192, when he was strangled in a bathtub by a wrestler.

Emperors of ancient Rome tended to die bloody, violent deaths. In fact, a Roman gladiator had better odds of surviving a brutal fight in the arena than an emperor had of dying peacefully of natural causes, according to a new study.

At his day job, study author Joseph Saleh, an associate professor with the Center for Space Technology and Research at Georgia Tech in Atlanta, researches aerospace engineering. But his work evaluating spacecraft reliability and failure — coupled with a longtime fascination with Roman history — led him to question if it might be possible to use the same statistical models to calculate the inherent risk in the prestigious job of Roman emperor.

“That it was a risky business was known, at least qualitatively,” Saleh told Live Science. What had never been explored was how an emperor’s chances of dying from violence might change over time — their “time to failure,” Saleh said.

Some of those “failures” were quite gruesome. Publius Septimius Geta, who died in A.D. 211, was slaughtered in his mother’s arms when he was only 21 years old, on the orders of his older brother Caracalla. Caracalla was then murdered in A.D. 217, allegedly while defecating by the side of a road, wrote Michael Meckler, a scholar of Roman history at The Ohio State University.

The emperor Marcus Aurelius Commodus Antoninus, who reigned from A.D. 177 to 192, also suffered a grisly fate. After a failed poisoning attempt, a wrestler sent by disgruntled Roman senators strangled the emperor while he was in the bath, according to Dennis Quinn, a historian and associate professor at California State Polytechnic University.

Overall, the new analysis found that a Roman emperor’s chances of survival were roughly equivalent to those of someone playing a game of Russian roulette with four bullets in the revolver instead of just one, Saleh said in the study.

Saleh used a statistical method typically performed by engineers to see how long it takes equipment to fail. Many devices, when analyzed this way, fall into a pattern known as a bathtub curve. There are multiple failures when the device first hits the market. Then, failures taper off for a while. After devices have been around long enough to start wearing out, failures spike again, Saleh explained.

He discovered that Roman emperors followed a similar pattern. Their risk of death was the highest during the first year in power. But if a ruler managed to survive his first year and stayed alive for the next seven years, his odds of dying declined significantly. However, that grace period lasted only four years. Once an emperor reached his 12th year in power, his odds of dying soared again, Saleh reported.

Like devices that fail early, emperors who died in the first years of their reigns did so because they demonstrated fatal “design flaws,” undermining confidence in their ability to rule, Saleh said. Emperors who died after 12 years in power were more like devices suffering from “wear-out failures”: They were vulnerable to societal changes, the rise of new enemies or new attacks from old enemies that had regrouped, Saleh wrote.

“It’s very interesting that something so haphazard as the assassination of a Roman emperor has an underlying structure to it,” Saleh said.

The findings were published online Dec. 23 in the journal Palgrave Communications.

Mum and three kids lost in jungle for 34 days are...