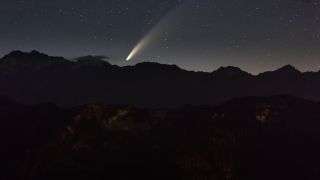 Comet NEOWISE seen in the night sky at Jaufenpass in South Tyrol, Itlay.

SpaceX satellites are ruining skywatchers’ views (and photographs) of NEOWISE, the brightest comet in the Northern Hemisphere since the 1995-96 show of Hale-Bopp.

Visible just above the horizon right now, the comet appears faint and small to the naked eye, but can be seen clearly through cameras with long, telephoto lenses. Usually, when photographers capture objects like this in the night sky they use long exposure times, leaving the camera aperture open to collect light over the course of several seconds. But now comet-chasers report that a new fleet of SpaceX’s Starlink satellites is leaving bright smears across their NEOWISE snaps, as the shiny orbiters streak through their frames during long exposures.

17 30-second images of the comet added up by @cielodecanarias, completely photobombed by @elonmusk’s #Starlink satellites. It’s a few hundreds of them right now,there will be a few thousands in the near future. @SpaceX is committed to coating orienting them better but still…. pic.twitter.com/TYtTf5xwhcJuly 22, 2020

This isn’t the first time SpaceX has come under fire for these new sources of overhead light pollution. When the first satellites in the Starlink constellation, part of the company’s plan to deliver internet access from orbit, launched in 2019, astronomers immediately raised concerns about their reflective properties. Telescopes, like consumer cameras, usually use long exposures in their scientific work. Starlink seems to be particularly reflective and to orbit at an elevation that can leave bright smears across telescope sensors and pollute data.

“When we develop new, big facilities, big observatories, big surveys to go and do things like discover hazardous asteroids, we design them to within an inch of their lives. We do so to make sure that every [risk] is accounted for,” Alex Parker, a Colorado-based astronomer, told Live Science in May 2019. “This is one of those confounding factors that, generally speaking, we haven’t prepared for because it hasn’t been an issue up ’til now.”

Parker told Live Science that the Starlink fleet, which could eventually number in the thousands, seems to be particularly inclined to shine brightly at night. (Currently, 422 Starlink satellites are in orbit.)

NEOWISE’s appearance in the dawn sky has created a rush of interest in astrophotography, and with it a new batch of skywatchers disappointed to see their view of the universe obscured by Starlink’s satellites in low-Earth orbit.

Starlink satellites near or over comet NEOWISE…😔Not visible to the naked eye, but these are only three of the several (unprocessed yet) photos where the trails are visible on a single night (a ~1h shooting session). It’s becoming difficult to avoid them in an astrophotography. pic.twitter.com/OTyGY2B71LJuly 20, 2020

SpaceX, which has not returned a request for comment, has said it’s taking steps to reduce Starlink’s light pollution. But, as of this writing, the bright streaks remain an issue. 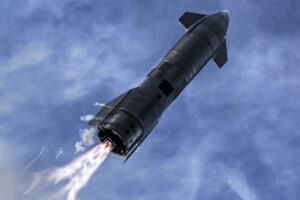