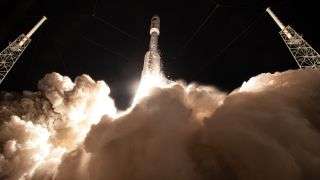 A United Launch Alliance (ULA) Atlas V rocket takes off on an Air Force mission on Aug. 8, 2019. SpaceX and ULA will share the job of carrying «national security» cargo for the military going forward, as the Pentagon rushes to retire the Atlas V and its Russian-made rocket engines.

The Department of Defense announced Friday (Aug. 7) that Elon Musk’s company and United Launch Alliance (ULA) — a joint project of Boeing and Lockheed Martin — would share the job between 2022 and 2026 of launching into space the military’s highest-priority satellites, «national security» cargo which would do things like intelligence gathering, GPS and military communications. Established military supplier Northrop Grumman and Amazon billionaire Jeff Bezos’ company Blue Origin also competed for this multi-billion dollar contract, but lost out to ULA and SpaceX, which will split the contract 60-40, respectively.

This award marks the start of «Phase 2» of the Air Force’s National Security Space Launch (NSSL) program, whose goal is to ensure the U.S. military has infrastructure to get satellites into  space. The Pentagon said the decision came down to money and the technical expertise demonstrated by the SpaceX-ULA venture.

«We evaluated every proposal by the published award criteria, technical factors being first and foremost, then followed by past performance, their ability to work with small business, and then finally totally evaluated price,» Will Roper, assistant secretary of the U.S. Air Force for acquisition, technology and logistics, said in a conference call reported by Spaceflight Now. For instance, the SpaceX rockets, called Falcon 9 and Falcon Heavy, are more cost-efficient compared with Lockheed Martin and Boeing’s older rockets. ULA is also developing a new rocket called the Vulcan Centaur, which is thought to offer cost-savings similar to that of the SpaceX rockets.

In addition, the Pentagon is trying to wean from its reliance on Russian-made RD-180 rocket engines to shoot satellites into Earth orbit.

«Today’s awards mark a new epoch of space launch that will finally transition the Department off Russian RD-180 engines,» Roper said in a statement from the Space Force, a branch of the military established in 2019 to coordinate space activities.

Until 2014, relying on Russian-made engines for military launches seemed more or less fine. But that year, relations between the U.S. and Russia seriously soured after Russia invaded Ukraine.

—The 10 most dangerous space weapons ever

«While the engine is built in Russia, access to the engine had never appeared to be in serious jeopardy despite the ups and downs in US-Russia relations since the end of the Cold War,» analyst Jeff Foust wrote at the time for The Space Review. «But what a difference a year — or even a few months — makes. Worsening relations with Russia over the Ukraine crisis have raised concerns that Russia could block exports of the engine to the U.S.»

SpaceX’s Musk has long argued that the . large U.S. purchases of imported RD-180 engines closes off competition for smaller, American companies to produce rocket engines. In fact, he won a temporary court order that halted RD-180 imports as part of a three-way legal battle between SpaceX, the Air Force and ULA. (SpaceX argued that an Air Force bulk rocket purchase from ULA didn’t offer other companies enough opportunity to compete.)

The Pentagon decided, Foust reported, to find another source for RD-180-type rockets. All of the companies that competed for this contract proposed relying on U.S.-made engines.

The details still aren’t set in stone however. ULA is expected to launch a Vulcan Centaur no earlier than 2021, and the rocket still has to be certified for national security missions. Spaceflight Now reported that if the rocket isn’t certified by 2021, ULA will likely use older, rockets for at least two 2022 missions.

Blue Origin and Northrop Grumman, the two companies that lost out on this contract will continue to provide support equipment like solid rocket boosters for national security missions. The companies can also continue to launch less-critical equipment for the military and other customers.

And while the companies lost out to Musk and the rocket conglomerate ULA this round, companies have fallen in and out of favor with the Air Force’s space launch programbefore.

Back in 2018, the Pentagon handed $967 million to ULA, $792 million to Northrop Grumman and $500 million to Blue Origin in contracts to support their rocket development programs. SpaceX, left out, sued, arguing the funds were «wrongly awarded,» as CNBC reported.

While Blue Origin and Northrup Grumman have two rockets that they’re still developing, tor the next several years, and likely several dozen national security launches, the most elite roles in military spaceflight belong to ULA and SpaceX.