Home Space and Ufo Sun-watching spacecraft just might fly through tail of Comet ATLAS in rare... 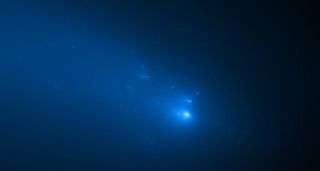 Last month, Comet ATLAS shattered skywatchers’ hopes of a brilliant display when it began crumbling — but scientists have spotted a new opportunity to study its rubble.

That opportunity comes from the trajectory of Solar Orbiter, a partnership between NASA and the European Space Agency (ESA). While the spacecraft was designed to focus on the sun, it turns out that the instruments it carries could also gather valuable information about Comet ATLAS’ tail in an unprecedented observational opportunity.

“If Solar Orbiter instruments detect material from Comet ATLAS, it will be the first predicted serendipitous comet tail crossing by an active spacecraft carrying appropriate instrumentation for the detection of cometary material,” the scientists wrote in a new paper exploring the opportunity.

Astronomers first spotted an icy lump officially dubbed C/2019 Y4 but now known as Comet ATLAS on Dec. 28, 2019, using an observatory in Hawaii called Asteroid Terrestrial-impact Last Alert System. Over the next few months, the faint comet brightened extraordinarily rapidly, sparking hopes that the ice ball might put on a spectacle when it was closest to the sun, in late May.

Instead, in April, Comet ATLAS started falling apart. By the end of the month, the comet was in more than half a dozen pieces, according to photographs the Hubble Space Telescope snapped. For skywatchers, the news was a real bummer.

Meanwhile, Solar Orbiter launched on Feb. 9 on a mission to measure highly charged particles called plasma in the sun’s outer atmosphere and to take images of the sun’s poles, among other tasks. Right now, scientists are warming up the spacecraft’s instruments while Solar Orbiter cruises toward Venus to nudge the probe closer to the sun.

When a trio of scientists compared the trajectories of the two objects, they found a tantalizing coincidence: Solar Orbiter should pass through the tail of Comet ATLAS in late May or early June.

They thought to check because the lead author on the new research is also heading up a new ESA mission called Comet Interceptor, which would launch in 2028. The spacecraft would hang around in a steady orbit far from Earth, waiting for pristine comets to wander toward the inner solar system for the first time. When scientists spot a promising target, a miniature probe will separate from the main spacecraft and zoom over to study the comet up close.

That park-and-wait arrangement is crucial, since time is of the essence when it comes to new comets. But it turns out that Solar Orbiter has mimicked the same arrangement — completely by chance.

The scientists have calculated that on May 31 or June 1, Solar Orbiter could cross the outer ion tail of Comet ATLAS, where charged particles streaming off the sun ionize cometary gas. If the comet is losing enough material at the time, two instruments on the spacecraft may be able to detect ions or magnetic field perturbations from the comet.

Then, on June 6, Solar Orbiter should pass through the dust field left by Comet ATLAS about 2.5 weeks prior. Depending on how much dust the comet lost, Solar Orbiter instruments may be able to spot that dust slamming into the spacecraft or identify some magnetic field shenanigans called Interplanetary Field Enhancements.

If Solar Orbiter does manage to catch any data from the Comet ATLAS encounters, the good fortune might represent just the harbinger of rapid, up-close comet observations in space.

The research is described in a paper published May 5 in the journal Research Notes of the American Astronomical Society.