Home Space and Ufo This bacteria can survive on pure hydrogen. Could alien life do the... 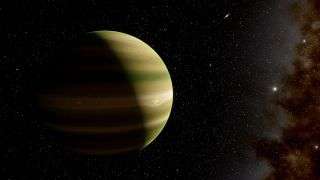 Most star systems that we know of support gas giant planets with atmospheres full of hydrogen and some helium.

Could aliens that breathe helium and hydrogen live on exoplanets throughout the cosmos?

A new study of life on Earth suggests it’s possible. And if so, that would mean the hunt for life in the universe may need to look beyond oxygen-bathed planets to ones with seemingly inhospitable atmospheres. There is no question that an oxygen atmosphere is conducive to life — after all, it’s what we breathe on Earth. But oxygen isn’t common in the cosmos. It makes up about 0.1% of the mass of the universe. Far more common is hydrogen (92%) and helium (7%). The planet that dominates the solar system is Jupiter and its atmosphere is 90% hydrogen and 10% helium, with just traces of other elements. Rocky planets like Earth, with atmospheres bereft of hydrogen and helium, are only a small component of star systems.

With such a predominance of hydrogen and helium in the universe, it would be useful to understand whether atmospheres composed of these elements could support life. Researchers led by planetary scientist Sara Seager at MIT set out to find out if they could. They chose two forms of Earth life that could exist without oxygen: E. coli, a bacteria found in the guts of many animals, including humans; and ordinary yeast, a fungus used to bake bread and make beer, and which is hard to find in stores these days.

Every few hours, the scientists removed some of the E. coli and yeast to find out if they survived. Both organisms were able to live in all atmospheres, the researchers reported May 4 in the journal Nature Astronomy. Given that both organisms evolved on Earth, it was not surprising that they did best in air, with the E. coli growing two times slower and yeast 2.5 orders of magnitude slower than they each did in normal air conditions.

However, the fact that both organisms survived in pure hydrogen and helium environments has potentially important consequences for astrobiologists, as the finding “opens the possibility for a much broader spectrum of habitats for life on diverse habitable worlds,” Seager and her colleagues wrote in Nature Astronomy. E. coli also produced a series of waste products that are already on the list of possible biosignatures of extraterrestrial life, including ammonia, methanethiol and nitrous oxide.

The question then becomes how this recent study can advance our search for life on other planets.

For a long time, the field of astrobiology was considered to be a speculative one — a field in which scientists would consider the possibilities but without any data to constrain their ideas. After all, life on other planets has never been observed — until recently, astronomers were not certain that planets around other stars even existed.

That all changed only a quarter century ago. In 1995, astronomers at the University of Geneva announced the discovery of a planet orbiting an ordinary star outside of our solar system. This was the first observed exoplanet and it was orbiting a star called 51 Pegasi, located about 50 light-years from Earth.

In the early days of planetary discovery, astronomers found only gas giant planets like our own Jupiter, all located very close to their host star. For a while, these “hot Jupiters” seemed to be the most common types of exoplanets, but that was misleading. These planetary giants were discovered because the planet’s gravity made their parent star wobble as they orbited, and astronomers could observe the wobble. Big planets in tight orbits cause bigger wobbles that are easier to detect.

That all changed in 2009, when the Kepler Space Telescope was launched. Kepler used a different method to search for exoplanets. Basically, it watched distant stars and looked for the shadow cast by planets as they passed in front of the parent star. Kepler ceased operations in late 2018, but during its near-decade of operations, it discovered more than 2,600 exoplanets. The characteristics of these planets are diverse, but even the Kepler program found many hot Jupiters.

Kepler, however, wasn’t able to search for life on those worlds. First, many of the planets it discovered were so far away any attempt to image their atmospheres would be difficult, and second it didn’t have instrumentation to see the planets’ atmospheres.

The first problem is being solved by TESS (Transiting Exoplanet Survey Satellite), which was launched in early 2018 and uses the same technique as Kepler to survey nearby stars for planets.

Observing the atmosphere requires more powerful telescopes than Kepler or TESS. For instance, the first observed atmosphere of a planet outside our solar system was accomplished in 2001. Researchers used the Hubble Space Telescope to peer at a star called HD 20945. As the planet crossed in front of the star, Hubble instruments observed light emitted from sodium, which was interpreted as sodium suspended in a planetary atmosphere. Additional study in 2008 also revealed that the planet was surrounded by hydrogen.

And, of course, that is why the recent study at MIT is so interesting. Astronomers know that Jupiter’s atmosphere is predominantly hydrogen and helium, and they’ve observed a hydrogen atmosphere around a planet orbiting a distant star. With this new finding that Earth-based life can exist in a pure hydrogen or helium environment, astrobiologists should be sure to study the spectrum of light emitted by planets enshrouded by hydrogen, with an eye toward rocky planets with such atmospheres, the researchers said.

For everyone interested in extraterrestrial life, the future is very promising. The TESS observatory is busily finding nearby exoplanets. In 2021, NASA plans to launch the long-awaited James Webb Space Telescope (JWST), which is intended to replace and supersede the hugely successful Hubble telescope. Astronomers plan to use JWST to scan known exoplanets, looking for the signatures of life. Now, with MIT’s recent study, astrobiologists are sure to add planets surrounded by hydrogen to the list.