Home Space and Ufo Velociraptor: Facts about the ‘Speedy Thief’ 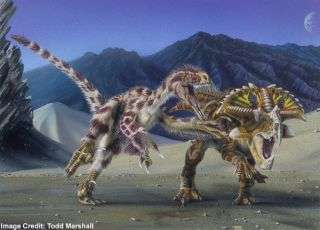 Velociraptor is one of the most bird-like dinosaurs ever discovered. It was small and fast, and the sickle-shaped claw on the second toe of each foot made it a formidable predator. A special bone in its wrist allowed it to swivel its wrist sideways in a flapping motion and to fold its arm against its body like a bird. This motion allowed it to snap its arms forward to grab fleeing prey and is an important part of the flight stroke in modern birds.

Velociraptor roamed the Earth about 85.8 million to 70.6 million years ago during the end of the Cretaceous Period.

In 1924, Henry Fairfield Osborn, then-president of the American Museum of Natural History, named Velociraptor. He bestowed the name on this dinosaur, which is derived from the Latin words “velox” (swift) and “raptor” (robber or plunderer), as an apt description of its agility and carnivorous diet.

Earlier that year, Osborn had called the dinosaur Ovoraptor djadochtari in an article in the popular press, but the creature wasn’t formally described in the article and the name “Ovoraptor” wasn’t mentioned in a scientific journal, making Velociraptor the accepted name.

There are two Velociraptor species, V. mongoliensis and V. osmolskae, the second of which was only identified in 2008.

A member of the Dromaeosauridae family of small- to medium-sized birdlike dinosaurs, Velociraptor was roughly the size of a small turkey and smaller than others in this family of dinosaurs, which included Deinonychus and Achillobator. Adult Velociraptors grew up to 6.8 feet (2 meters) long, 1.6 feet (0.5 meter) tall at the hip and weighed up to 33 lbs. (15 kilograms).

Like Tyrannosaurus rex, Velociraptor had a prominent role in the “Jurassic Park” movies, but scientists do not believe it resembled anything close to its Hollywood depiction in terms of size or appearance. In fact, the movies’ Velociraptor was actually modeled after Deinonychus, and sported a similar size and snout.

While the Velociraptor was featherless in the movies, paleontologists discovered quill knobs (places where the flight-related feathers of birds are anchored to the bone) on a well-preserved Velociraptor forearm from Mongolia in 2007, indicating the dinosaur had feathers.

Despite having feathers, however, the arms of Velociraptors were too short to allow them to fly or even glide. The find suggests that the dinosaurs’ dromaeosaurid ancestors could fly at one point, but lost that ability, according to the study published in the journal Science.

Velociraptor retained its feathers, and possibly used them to attract mates, regulate body temperature, protect eggs from the environment or generate thrust and speed while running up inclines.

Velociraptor had a relatively large skull , which was about 9.1 inches (23 centimeters) long, concave on the upper surface and convex on the lower surface, according to a 1999 description of a Velociraptor skull, published in the journal Acta Palaeontologica Polonica. Additionally, its snout was long, narrow and shallow, and made up about 60 percent of the dinosaur’s entire skull length.

Velociraptor’s tail of hard, fused bones was inflexible, but likely kept it balanced as it ran, hunted and jumped.

Velociraptor, like other dromaeosaurids, had two large hand-like appendages with three curved claws. They also had a sickle-shaped talon on the second toe of each foot. They normally kept these talons off the ground like folded switchblades, and used them as hooks to keep their prey from escaping (similar to modern birds of prey), according to a study published in 2011 in the journal PLOS ONE.

What did Velociraptor eat?

Velociraptor was a carnivore that hunted and scavenged for food. “It spent the vast majority of the time eating small things,” which likely included reptiles, amphibians, insects, small dinosaurs and mammals, said David Hone, a paleontologist at Queen Mary University of London.

Velociraptor, which means “speedy thief,” had a sharp, deadly, sickle-shaped, retractable, 3.5-inch (9 cm) claw on each foot (located on each second toe). The Velociraptor may have been able to run up to roughly 40 mph (60 km/hr) for short bursts. This predator may have hunted in packs. (Image credit: Courtesy American Museum of Natural History)

Preserved in sand deposits after being buried from a collapsing sand dune or sudden sandstorm, the pair proved that Velociraptors hunted for food, but an attack on such a large animal probably wasn’t common. “Few predators ever take on prey bigger than 50 percent of their body mass,” Hone told Live Science, adding that the Velociraptor could have been starving or simply “young and dumb.”

But that’s not to say Velociraptor didn’t frequently eat Protoceratops carcasses. In 2008, researchers unearthed Protoceratops fossils marred with marks and grooves matching raptor teeth, as well as two teeth that belonged either to Velociraptor or another dromaeosaurid.

After analyzing the remains, Hone and his colleagues determined that the raptor didn’t kill the plant-eater. Instead, it fed on the Protoceratops, which likely had little meat left on it (hence the bite marks on the herbivore’s jaws and raptor’s knocked-out teeth), according to the study, published 2010 in the journal Palaeogeography, Palaeoclimatology, Palaeoecology.

In 2012, Hone and his colleagues also discovered that Velociraptors sometimes ate pterosaurs, when the team found a large pterosaur bone in the guts of a Velociraptor. The pterosaur had a wingspan of about 6.5 feet (2 m) and may have been a formable foe even if it were sick and injured, suggesting the Velociraptor most likely scavenged the pterosaur bone, Hone said.

The first Velociraptor fossil was discovered by Peter Kaisen on the first American Museum of Natural History expedition to the Outer Mongolian Gobi Desert in August 1923. The fossil consisted of a skull that was crushed but complete and a toe claw.

Velociraptor fossils have been found in the Gobi Desert, which covers southern Mongolia and parts of northern China. Velociraptor mongoliensis have only been discovered in the Djadochta (Djadokhta) Formation, which is in the Mongolian province of Ömnögovi.

Velociraptor osmolskae was discovered at the Bayan Mandahu Formation in Inner Mongolia, China. The species was described based on a partial adult skull. [Image Gallery: Dinosaur Fossils]

Like the “Fighting Dinosaurs,” other Velociraptor fossils were found in arid sand dune environments.

Life after death: Man SEPARATED from consciousness in NDE as ‘time...