Home Animals 3 Monster Black Holes Are About to Collide 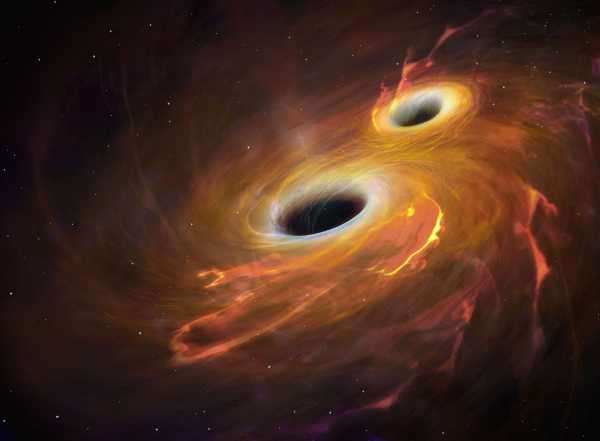 This artistic interpretation shows two black holes on a collision course. In the newfound system called SDSS J084905.51+111447.2, three supermassive black holes are about to merge.

A rare trio of supermassive black holes has been caught in the act of coming together.

Three of the light-gobbling monsters nuzzle shoulder to shoulder in SDSS J084905.51+111447.2, a system of three merging galaxies about 1 billion light-years from Earth, a new study reports.

. “This is the strongest evidence yet found for such a triple system of actively feeding supermassive black holes.”

Making the epic find wasn’t easy; it took observations by multiple instruments and help from lots of citizen scientists.

The trail started with the Sloan Digital Sky Survey (SDSS) telescope in New Mexico, which imaged SDSS J084905.51+111447.2 in optical light. Volunteers with the citizen-science project Galaxy Zoo then used those images to flag the system as an ongoing galaxy merger.

Next, the researchers looked at data gathered by NASA’s Wide-field Infrared Survey Explorer (WISE) spacecraft. WISE spied lots of infrared light emanating from the system during a phase of the merger in which more than one of the supermassive black holes was expected to be accreting material rapidly, the researchers said.

Further observations in X-ray and optical light sealed the deal. NASA’s Chandra X-ray Observatory detected strong sources of X-ray light near each of the merging galaxies’ centers, indicating that lots of gas and dust was being consumed there — a sign of black-hole feeding.

NASA’s Nuclear Spectroscopic Telescope Array spacecraft, or NuSTAR, also spotted evidence of gas and dust circling one of the supermassive black holes. And optical-light data gathered by the SDSS and the Large Binocular Telescope in Arizona further bolstered the notion that all three black holes were active.

“Through the use of these major observatories, we have identified a new way of identifying triple supermassive black holes,” Pfeifle said. Each telescope gives us a different clue about what’s going on in these systems. We hope to extend our work to find more triples using the same technique.” 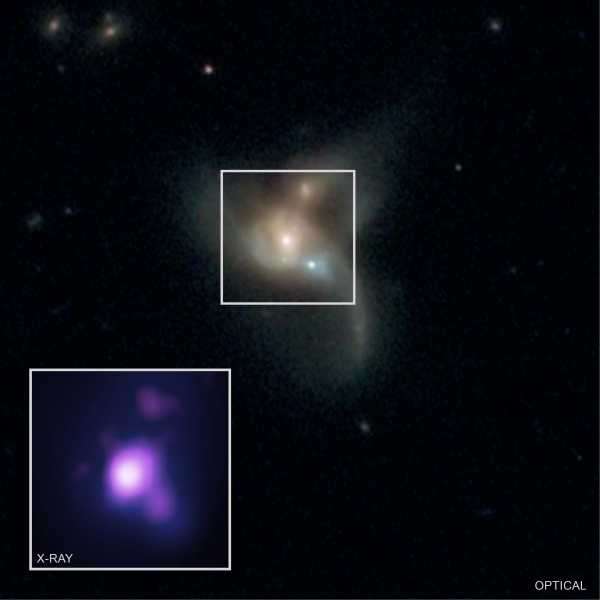 A view from multiple telescopes of SDSS J084905.51+111447.2, a system of three merging galaxies found about 1 billion light-years from Earth. The system harbors three supermassive black holes on a collision course, a new study reports.

The distance from each supermassive black hole to its nearest neighbor ranges from 10,000 light-years to 30,000 light-years, study team members said. But those spans will shrink, because the black holes are apparently bound to merge, just as their parent galaxies are doing now.

Astronomers already know a bit about how black holes collide; after all, the Laser Interferometer Gravitational-Wave Observatory (LIGO) has detected the gravitational waves generated by a number of black-hole mergers. But a triple system probably works a bit differently than the traditional merging duo does, the researchers said.

For example, the nearby presence of a third supermassive black hole should make its two neighbors come together much faster.

“This may be a solution to a theoretical conundrum called the ‘final parsec problem,’ in which two supermassive black holes can approach to within a few light-years of each other, but would need some extra pull inwards to merge because of the excess energy they carry in their orbits,” officials on the Chandra mission wrote in the same statement. “The influence of a third black hole, as in SDSS J0849+1114, could finally bring them together.”

The new study appears in the latest issue of The Astrophysical Journal. You can read a preprint of the paper for free at arXiv.org.

UFOs ‘may be piloted by time-travelling humans’, scientist claims