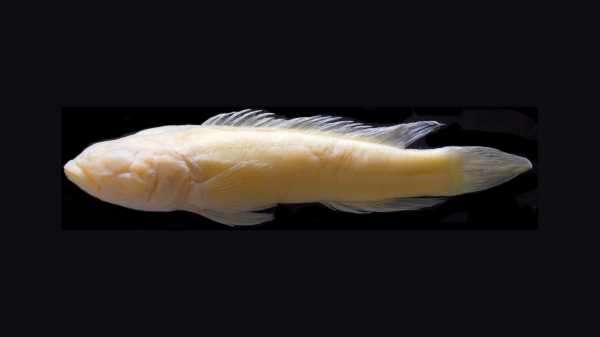 Lamprologus lethops, a fish that lives in the lower Congo River, is pale and blind like fish that dwell in caves deep underwater.

SAN FRANCISCO — A mysterious case of dying fish in the lower Congo River helped scientists discover that this body is the deepest river on the planet. It’s also a place where raging rapids, powerful currents and even submerged “waterfalls” divide the water, much as mountain ranges can separate habitats on land.

These impassable river barriers isolate fish populations and have shaped the emergence of hundreds of species, according to research presented on Dec. 12, 2019, here at the annual meeting of the American Geophysical Union (AGU).

Their data also showed that powerful currents cycled through the water, creating strong jets that shoot from the river bottom up to the surface. A small fish living near the bottom that swam into one of those jets would be rapidly launched to the surface hundreds of feet above, where it would die of the bends, Stiassny explained.

While the mystery of the dying fish may have been solved, there is still much to discover about this unique river location and the animals that live there. Intriguingly, some of the fish populations that are isolated from each other have nonetheless evolved similar traits, in a process known as convergent evolution. How that happens in this unique and extreme environment is the next big question that Stiassny and her colleagues are diving into, she told Live Science.

Want more science? Get a subscription of our sister publication “How It Works” magazine, for the latest amazing science news.