Home Animals Ancient caiman with ‘no parallel in the modern world’ left 46 bite... 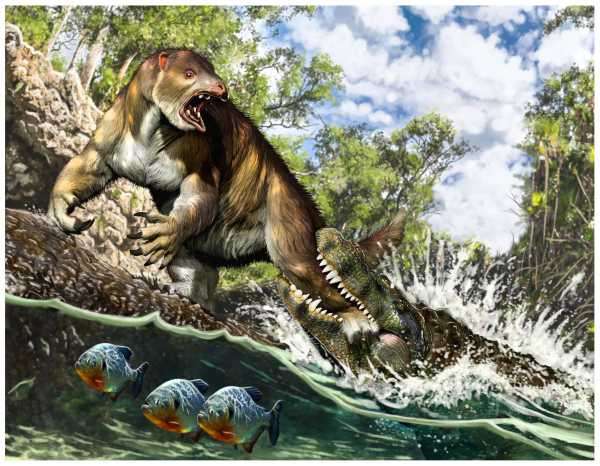 About 13 million years ago, a ground sloth wandered too close to the water’s edge, where a caiman lay waiting to strike. The attack likely happened in a flash, and ended with the caiman leaving nearly 50 tooth marks in the sloth’s hind leg, a new study finds.

Most of the bite marks on the sloth’s bone are shallow pits and scores, but the larger marks that punctured the tibia, better known as the shinbone, indicate that the caiman’s mouth closed over the sloth’s leg, inflicting terrible damage.

“There is no chance” the sloth survived, said study senior researcher Rodolfo Salas-Gismondi, a researcher of the BioGeoSciences Lab at Cayetano Heredia University in Lima, Peru. “The tibia of the sloth shows no signal of bone regeneration, which would be evidence of survival.”

The ground sloth (Pseudoprepotherium sp.) bone was found by the Napo River in northeastern Peru in 2004 by study co-author François Pujos, a paleontologist who specializes in sloth evolution at The Scientific Technological Center at the Argentine National Research Council (CCT-CONICET).

It wasn’t immediately clear what had left the 46 bite marks on the sloth’s left tibia. But in the years since Pujos discovered the bone, researchers have learned that the lakes and swamps in the early Amazon “were plethoric in crocodylians, with up to seven species living together at that time,” including a shovel-mouthed crocodile with peg-like teeth, Salas-Gismondi told Live Science in an email. (The crocodylian order includes extinct and living crocodiles, alligators, caimans and gharials.) 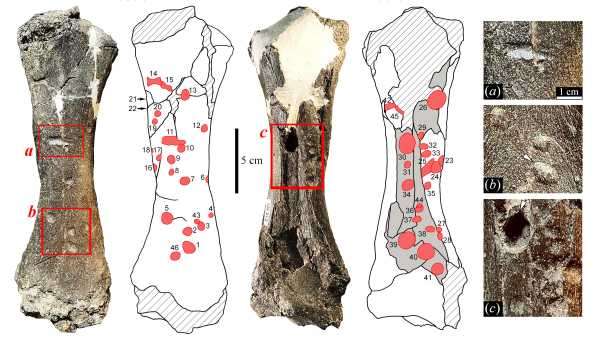 The ground sloth’s bone was found in the Pebas Mega-Wetland System, in northeastern Peru. Here are drawings and photos showing the bite marks (in red) that cover the left tibia (shinbone) of the ground sloth Pseudoprepotherium. 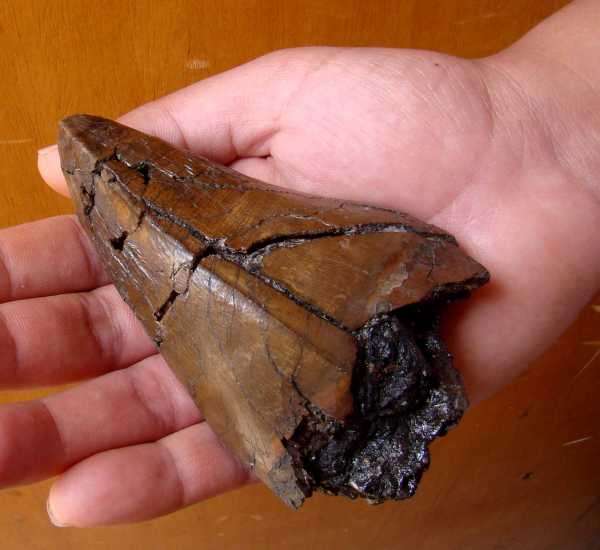 A large Purussaurus tooth found in the Pebas Formation, which is close to Iquitos City, Peru. 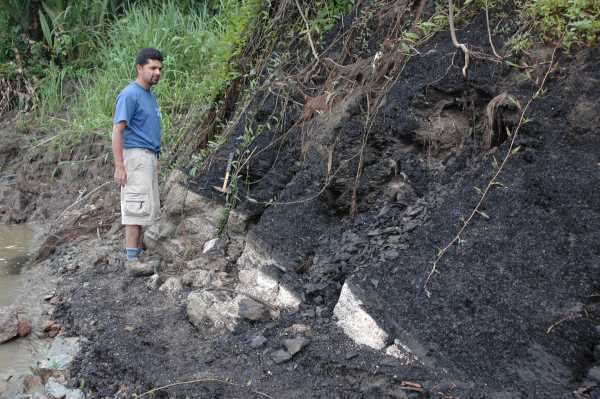 This 2004 photo shows lignite (soft coal) deposits by the Napo River that hold Miocene epoch bones, including the tibia belonging to the sloth. 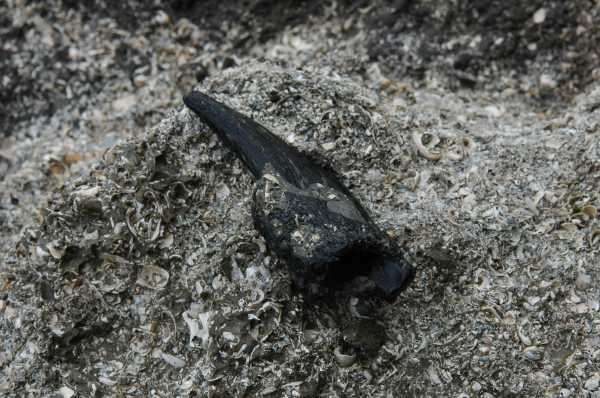 A sloth claw found at the Pebas Formation in 2004. 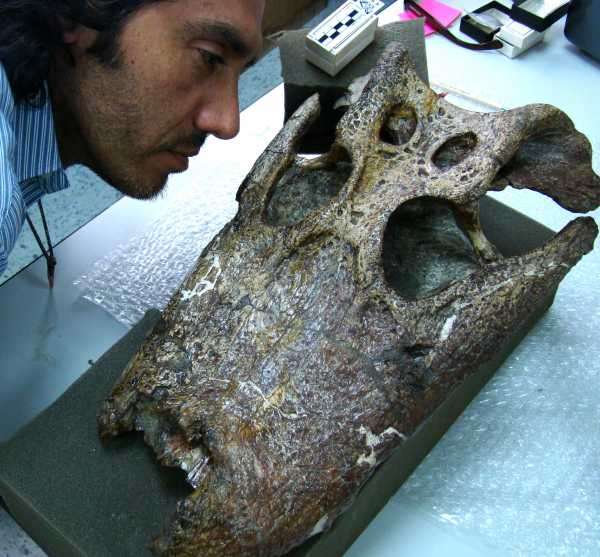 Rodolfo Salas-Gismondi examines a juvenile skull of another Purussaurus, which was found in La Venta, Colombia. 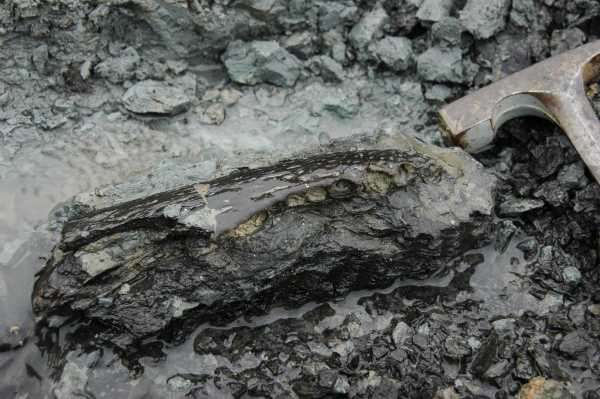 Researchers found a small Purussaurus jaw at the Pebas Formation by the Napo River in Peru. The sloth tibia was found nearby.

Last year, Salas-Gismondi recalled, Pujos approached him and asked, “Are we now ready to know who killed this ground sloth?” The two began investigating the potential criminals. They ruled out other predators living in Peru’s prehistoric swamps, including giant flightless birds (who had no teeth) and marsupials (whose teeth didn’t match the bite marks on the sloth bone). Instead, all of the evidence incriminated the giant caiman Purussaurus — a behemoth that could grow up to 33 feet (10 meters) long, making it the largest  known non-marine predator after the extinction of non-avian dinosaurs, Salas-Gismondi said.

“The dentition and anatomy of Purussaurus perfectly matches with the marks found in the tibia,” he said. This Purussaurus — likely a 13-foot-long (4 m) juvenile based on the size of its tooth marks — likely ambushed the ground sloth, although another scenario is also possible, he said.

“We cannot discard that the marks were produced after death, during dismemberment of the ground sloth carcass,” Salas-Gismondi noted.

Crocodylians often leave this many bite marks on a single bone, said Stephanie Drumheller-Horton, a paleontologist at the University of Tennessee in Knoxville, who wasn’t involved with the study. “I’ve done some work with modern crocodylians,” Drumheller-Horton told Live Science. “They really can wear out a bone. It’s not unusual to find dozens and in some cases hundreds of individual tooth marks on a single bone.”

—Photos: These animals used to be giants

This is only the second fossil on record showing evidence of a Purussaurus attack. The other is a shell from the aquatic turtle Podocnemis, which is on display at the Natural History Museum in Lima. That turtle sustained a 25-inch-long (60 centimeter) bite mark on its shell. It “survived the attack,” Salas-Gismondi said, “but lost a big portion of the carapace [the upper shell] and the left hindlimb was amputated. We know that the turtle survived because the carapace shows bone regeneration.”

Crunching a turtle shell would have been no problem for Purussaurus, which lived during the Miocene epoch (23 million to 5 million years ago). As an adult, this caiman had a bite force estimated at 7 tons (6.3 metric tons), more than four times the strongest bite ever measured in living and extinct animals, according to earlier research. (The saltwater crocodile Crocodylus porosus has a bite force of 1.6 tons, or 1.5 metric tons.)

“With this bite force, adult Purussaurus individuals were able to incorporate into their diet whatever, no matter the size or hardness,” Salas-Gismondi said. “These animals had no parallel in the modern world.”

The study was published online yesterday (Aug. 26) in the journal Biology Letters.

The ‘hospitals of horrors’ where patients fight over oxygen and rats...