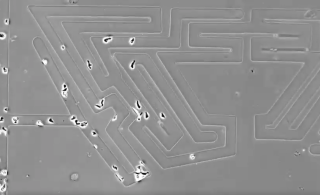 For a single cell, the human body is a gargantuan maze of tissues, chemicals and capillaries, crammed full with trillions of other cells all bustling about like commuters at the world’s busiest train station. Somehow, amidst all this hubbub, most cells still manage to reach their destinations.

How do they do it? Many cells have a trick up their sleeves known as chemotaxis —essentially, the ability to navigate by sensing the presence or absence of chemical attractants in the environment. Sperm cells use chemotaxis to find eggs, white blood cells use it to rally around infection sites and cancer cells use it to metastasize through vulnerable tissues.

So, can an amoeba use chemotaxis to solve the world’s most infamous hedge maze? That’s precisely what happened in a new study published today (Aug. 27) in the journal Science.

To test the power of a specific form of chemotaxis employed by the farthest-traveling cells, researchers created miniature versions of the hedge maze at Hampton Court Palace (once the residence of King Henry VIII and his descendants) plus dozens more microscopic labyrinths of varying complexity. Remarkably, when amoebas were released in these mazes they darted to the exits with incredible accuracy, using chemotaxis to effectively “see around corners” and avoid dead-ends before they even reached them, study author Robert Insall said.

“The cells aren’t waiting for someone to tell them what to do,” Insall, a professor of mathematical and computational cell biology at the University of Glasgow in Scotland, told Live Science. “By breaking down the chemicals in front of them, they know which branch of the maze leads to a dead-end and which leads [to the exit]. It’s absolutely unbelievable.”

Cells in a maze

In their new study, the researchers focused on a specific form of cell navigation called “self-generated” chemotaxis. It relies on a simple philosophy: cells want to move from areas of a lower concentration of attractant (in this case, an acidic solution called adenosine monophosphate) into areas with a higher concentration.

“It’s sort of like the old saying, ‘the grass is always greener on the other side of the fence,'” Insall said. “The cows have eaten all of the grass where they are, and they want to get into the surrounding field where the grass is still growing.”

But sometimes there are multiple “fields” to choose from, illustrated in this study by the multiple branching paths of a maze. To determine which branch holds the higher concentration of attractant, cells break down the molecules in front of them, causing attractant from the nearby areas to diffuse toward them. As the cells move forward, the attractant ahead of them depletes more and more; eventually, short, dead-end branches of the maze are totally depleted of attractant, even before the cells reach the exit to a dead end. When faced with a short, depleted branch and a long, attractant-filled branch, the cells will never take the dead-end route, Insall said.

“They really can see around corners,” Insall said.

The researchers illustrated this phenomenon with computer models at the start of their study, but wanted to see it in action, too. So, they created more than 100 microscopic mazes by etching grooves onto a silicon chip, with each path measuring between 10 and 40 microns wide. (For comparison, the thinnest human hairs measure about 20 microns wide).

Mazes ranged from easy (just a few branching paths before the exit) to difficult (with long dead-end paths, like the Hampton Court hedge maze replica) to impossible (according to Insall, a replica of Scotland’s Traquair House maze had to be scrapped, because all the amoebas kept dying before they solved the puzzle).

The researchers cast these tiny mazes in rubber, then flooded them with a fluid attractant that was piped in from the maze exit. At the start of each maze, soil amoebas called Dictyostelium discoideum lined up and began to swim forward, breaking down the fluid molecules before them. The longest mazes took about 2 hours for the savvy cells to solve, Insall said, while the shorter ones took just 30 minutes.

Images: human parasites under the microscope
10 of the strangest medical studies (in recent history, that is)
This otherworldly maze is now the world’s longest underwater cave

The real-life cells performed exactly as the team’s models predicted; when faced with the choice between a short dead-end path and a long path that led toward the exit, the cells always chose the long path. In harder mazes, which included dead-end paths that were just as long as the correct path, cells chose correctly about 50% of the time. In both cases, cells that entered the maze first were the most likely to reach the exit; cells that straggled found that every path, even the correct one, had already been depleted of attractant by their competitors, leaving the stragglers no information about where to go.

“The amount of information cells can read by breaking chemicals down is much more sophisticated than anyone thought,” Insall said. “That makes us think that most biological problems, where cells have to find their way from one place to another, almost certainly use a mechanism like this.”

Even though the study focused on amoebas, the researchers believe the results should hold true for any number of human body cells — be it blood cells darting through tissues to reach an infection, or cancerous glioblastoma cells swimming down white matter channels of the brain. The type of attractant is likely different in each situation (and, in many cases, is still unknown to scientists), but for cells navigating the winding labyrinth of our bodies, figuring out where the grass is greener may be the best way to go.

Bible news: How ‘man who inspired Jesus’ was exposed in ancient stone

Almost 70 per cent of coronavirus patients on Spain holiday island...