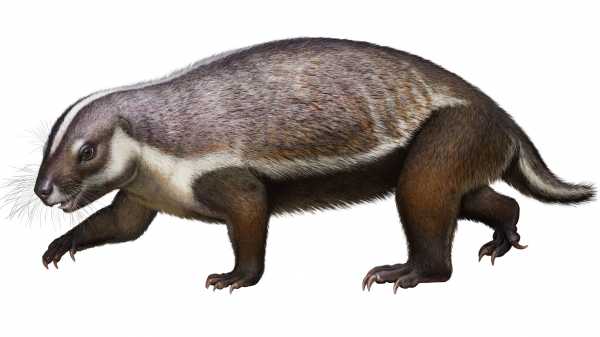 This life-like reconstruction of Adalatherium hui from the late Cretaceous of Madagascar shows off the creature’s weird-looking body and plentiful whiskers.

The oldest complete mammal fossil from the Southern Hemisphere is puzzling scientists with its mismatched body, strange skull holes and teeth that look like they’re “from outer space.”

The new fossil, reported today (April 29) in the journal Nature, is the oldest (and only) nearly complete skeleton from an extinct group of mammals known as Gondwanatherians. This mysterious bunch lived alongside the dinosaurs on the southern supercontinent of Gondwana. They’re known from a smattering of teeth and bone fragments, a single skull and the new, remarkable skeleton of an animal whose discoverers have dubbed the “crazy beast.”

The fossil is from northwestern Madagascar and dates back 66 million years, to the end of the Cretaceous period. Madagascar was already an island at the time, having drifted away from Africa by 88 million years ago, and the animals that lived there were completely bizarre, said David Krause, the senior curator of vertebrate paleontology at the Denver Museum of Nature & Science, who led the new research.

Among the animals found on Madagascar at this time were: the predatory, buck-toothed dinosaur Masiakasaurus knopfleri; a frog wider than a No. 2 pencil is long that may have eaten baby dinosaurs and was named Beelzebufo ampinga, or “devil frog”; and a crocodile with a short snout and bumpy teeth that probably ate plants.

“We actually think we had an herbivorous crocodile, and it doesn’t get much weirder than that,” Krause said during a press briefing.

Well, except maybe for the new mammal, Adalatherium hui. A field expedition led by Krause and his colleagues dug the stunning skeleton out of the ground in 1999, completely by accident. They were trying to collect a nearby crocodile skeleton, said Raymond Rogers, professor and chair of geology at Macalester College in Minnesota, who participated in the research.

“We recovered a skeleton not knowing we had a mammal beside it,” Rogers told reporters.

It took months to remove the possum-size skeleton from the rock, but the results are unprecedented. Most of the skeleton is preserved, except for part of the back of the skull and some pieces of the hips. Never before has so much of a Gondwanatherian been found. The previous best-preserved specimen was a skull of a large-eyed herbivore reported in the journal Nature in 2014 by Krause and his team. The researchers attribute the pristine preservation of the newfound A. hui to a mudflow that suddenly buried the creature. Such mudflows seem to have occurred seasonally in Madagascar at the time.

“It was probably buried alive by one of these mudflows,” Rogers said.

The name of the mammal comes from the Malagasy word for “crazy” and the Latinized Greek for “beast.” The species name hui is in honor of Yaoming Hu, a vertebrate paleontologist who died in 2008. 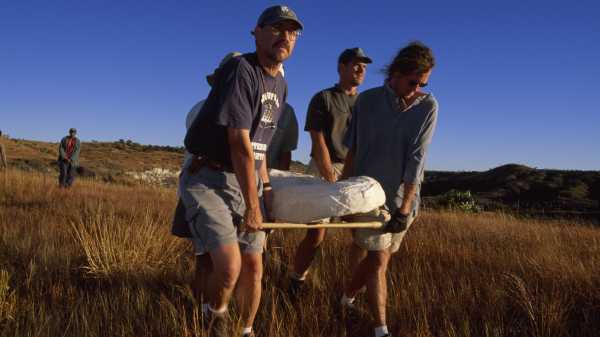 A. hui probably looked a bit like a badger, but it was like no mammal alive today. Most early mammals had sprawled-out legs, a bit like those of today’s crocodiles. A. hui’s back legs were sprawled out, too. But its front legs were aligned under its body, like a cat’s or a dog’s.

This alignment is so unheard-of that the researchers studying A. hui have no idea how the creature would have moved. It had strong back muscles that indicate that its back probably wiggled side-to-side as it walked, said study co-researcher Simone Hoffmann, an anatomist at the New York Institute of Technology.

“It probably means it walked really differently from anything that lived in the past or that is living today,” Hoffmann told reporters.

A. hui’s teeth were similarly confounding, said Krause, who compared them to something from outer space. Their bumps and ridges match no known teeth patterns in any extinct or living mammals. The animal had prominent incisors, something like a rodent, but the incisors are strange, with enamel only on the cheek side. Still, Krause said, the teeth suggest the animal was likely an herbivore that used its incisors for gnawing.

The skull of A. hui was weirdly pockmarked with holes. Some of these were clearly openings to allow nerves and blood vessels to pass to the snout. The number of these holes was indicative of a very sensitive snout, Krause said, leading the researchers to suspect that Adalatherium’s nose was well-whiskered. The animal’s strong claws suggest it was a digger, so perhaps these nerves detected rich sensations in dark underground burrows, Krause speculated.

Another of the holes, a large opening on top of the snout, is a complete mystery, Krause said. Nothing like it has been seen on a mammal skull before. It was probably covered with cartilage, but researchers don’t know why it existed. 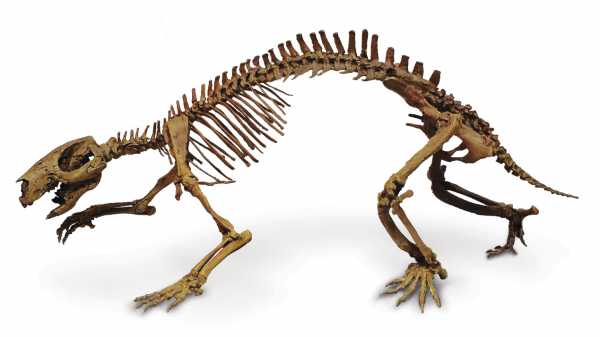 A mounted cast skeleton of Adalatherium hui. This early mammal would have wiggled from side to side as it moved during the late Cretaceous period.  Evolution of mammals

No living descendants of A. hui survive today. In fact, none of today’s mammals on Madagascar are related to the Cretaceous mammals found so far on the island, Krause said. This suggests that all of Madagascar’s mammals died off in the end-Cretaceous asteroid impact that also destroyed the non-avian dinosaurs. Today’s Madagascar mammals probably descended from animals that later floated on giant rafts of vegetation from coastal Africa, Krause said.

But the discovery of Adalatherium suggests that even when the dinosaurs roamed, islands led to weird evolution. Scientists have long known that species isolated on islands tend to evolve in strange ways. Islands might spawn giants like the fearsome Komodo dragon, for example, or miniatures like the now-extinct pygmy mammoths that once roamed Crete. The Cretaceous weirdos of Madagascar suggest something similar was going on. A. hui, for example, weighed around 6.8 lbs. (3.1 kilograms), 100 times heavier than the mouse-sized mammals that make up most of the earliest mammals on Earth, Krause said. It is the third-largest mammal ever found from the Southern Hemisphere Mesozoic (the era spanning from 250 million to 65 million years ago).

Researchers are still working to understand A. hui’s manner of movement and weird adaptations. They also have plenty more fossils from Madagascar to work through. Since 1993, the team has excavated more than 20,000 fossil specimens from the region. Highlighting the rarity of a find like A. hui, only 12 of those are mammal specimens.