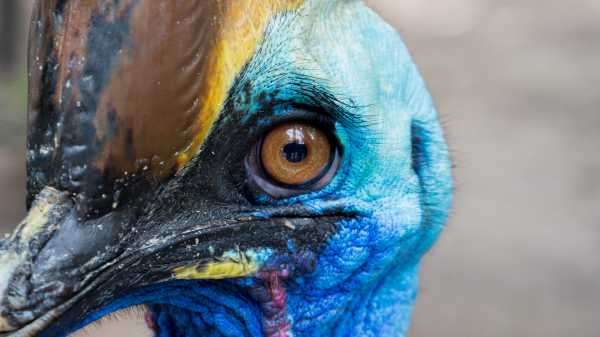 In some birds, like this cassowary, the resemblance to extinct theropod dinosaurs is easy to see.

What do sparrows, geese and owls have in common with a velociraptor or the mighty Tyrannosaurus rex? All can trace their origins to a bipedal, mostly meat-eating group of dinosaurs called theropods (“beast-footed”) that first appeared around 231 million years ago, during the late Triassic Period.

The earliest birds shared much in common with their theropod relatives, including feathers and egg-laying. However, certain traits – such as sustained, powered flight – distinguished ancient birds from other theropods, and eventually came to define modern-bird lineage (even though not all modern birds fly).

tree,” she said. “All of the species of birds we have today are descendants of one lineage of dinosaur: the theropod dinosaurs.”

What makes a bird, a bird?

Modern birds have feathered tails and bodies, unfused shoulder bones, toothless beaks and forelimbs that are longer than their hind limbs. They also have a bony plate near their tails called a pygostyle. Other types of extinct theropods had one or more of these features, but only modern birds have all of them, according to Takuya Imai, an assistant professor with the Dinosaur Research Institute at Fukui Prefectural University in Fukui, Japan.

In a primitive bird from Japan called Fukuipteryx — a 120-million-year-old avian that Imai described in November 2019 and the earliest known bird with a pygostyle — the preserved structure closely resembled the pygostyle of a modern chicken, Imai previously told Live Science. In other words, some structures in modern birds can be traced back to some of their earliest ancestors.

However, primitive birds still had much in common with non-avian theropods, said Jingmai O’Connor, a paleontologist specializing in dinosaur-era birds and the transition from non-avian dinosaurs, at the Institute of Vertebrate Paleontology and Paleoanthroplogy in Beijing, China.

In fact, early birds were “very dinosaur-like” compared to modern birds, O’Connor told Live Science in an email. “Some had long, reptilian tails, teeth and claws on their hands,” she said. And many theropod dinosaurs that were not birds had true feathers, “which are feathers that have a central part down the middle and branching barbs,” according to Clarke.

Paleontologists distinguish between animal groups through precise measurements of subtle variations in bones and other fossilized body tissues, including “little bumps and tubercles [a rounded bulge on a bone] that are related to reorganizing different muscle groups,” Clarke said. This morphological data is translated into numbers that are then processed by algorithms to pinpoint how animals are related, O’Connor explained. By using these algorithms in a system known as cladistics, experts can differentiate ancient birds from their theropod relatives.

The earliest known bird is Archaeopteryx (“ancient wing”), which lived around 150 million years ago in what is now southern Germany. The creature weighed around 2 pounds(1 kilogram) and measured about 20 inches (50 centimeters) in length; fossil evidence shows that it sported plumage on its tail and body. The shape of its forelimbs and feathers also suggests that Archaeopteryx was capable of powered flight, a trait associated with most modern birds. However, unlike birds today, Archaeopteryx retained individual, clawlike fingers at the tips of its wings.

Fossils of birds from the early Cretaceous Period (145.5 million to 65.5 million years ago) have been found in northeastern China, such as Confuciusornis, which lived around 125 million years ago, and had a beak and long tail-feathers. Some Confuciusornis fossils, described in 2013, even included medullary bone, a spongy tissue found in female birds that are sexually mature, Live Science previously reported.

Another piece of fossil evidence links ancient birds to their modern relatives through their digestion, in the form of the earliest known bird pellet — a mass of indigestible fish bones coughed up by a Cretaceous avian in China around 120 million years ago.

One defining feature of birds is their ability to fly, requiring large forelimbs covered with asymmetrically-shaped feathers and roped in powerful muscles, O’Connor said.

“In the lineage evolving towards birds, most likely a lineage within the Troodontidae [a family of birdlike theropods], flight is what separates birds from their closest non-avian dinosaur (probable troodontid) kin,” said O’Connor.

Then, after the evolution of flight, the small bones in birds’ hands “become reduced and fused up to create this kind of stiffened structure that supports the feathers of the wing,” Clarke said.

After the extinction of the non-avian dinosaurs at the end of the Cretaceous period, birds continued to evolve and diversify, developing more specialized features related to flight, such as an elongated structure in their breastbones (called a keel), and powerful pectoralis muscles to power the downstroke during flight, Clarke said.

“You see bigger and bigger pectoralis that are associated with this deep keel.  And that evolved after the origin of flight and is present in living birds,” she said.

Today, there are approximately 10,000 bird species worldwide. Birds might be as tiny as a hummingbird or as big as an ostrich; they might soar like an eagle or dive like a penguin. Nevertheless, they still belong to the same group of theropod dinosaurs that hatched Archaeopteryx 150 million years ago.

So, the next time you wonder what dinosaurs may have looked like when they walked the Earth, look no farther than the seagull eyeing your french fries at the beach, the crow scolding you from a fence, or the nearest pigeon pecking at crumbs on the sidewalk.