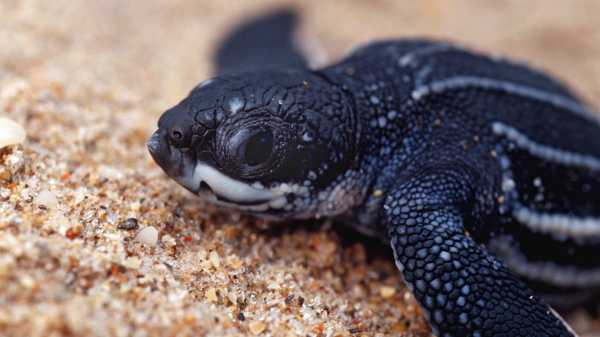 Baby leatherback sea turtles make their way to the ocean as soon as they hatch.

Baby leatherback sea turtles are doing better than they have in years, now that many humans are opting (or being ordered) to stay off beaches due to the COVID-19 pandemic.

On one beach in Thailand, for instance, environmentalists have found 11 leatherback sea turtle (Dermochelys coriacea) nests since November, the largest number of nests found there in the past two decades, according to The Guardian.

Beach closures and shelter-in-place orders to help people maintain social distancing during the pandemic have inadvertently kept many locals, tourists and even wildlife smugglers away from leatherback sea turtle nests and hatchlings.

“This is a very good sign for us because many areas for spawning have been destroyed by humans,” Kongkiat Kittiwatanawong, the director of the Phuket Marine Biological Centre in Thailand, told The Guardian.

Leatherback sea turtles were so scarce around the Phuket Marine Biological Centre, conservationists hadn’t found any nests in the past five years. These turtles also face risks from fishing gear, pollution, climate change and severe weather, according to the International Union for Conservation of Nature (IUCN).

Leatherbacks are the largest living turtle on record. They live all over the world (except for the polar regions) where they dive deep underwater while migrating from nesting areas to feeding hot spots to chow down on jellyfish, the IUCN reported.

In a single reproductive season, mature females can lay between three and 10 clutches of 60 to 90 eggs, the IUCN reported. However, most females wait two years or more between reproductive bouts. And a tiny percentage of these babies — just one in 1,000 — survives.

“The chances that turtles are going to be inadvertently struck and killed will be lower,” Godfrey told West Palm Beach’s local CBS 12 news. “All of the reduced human presence on the beach also means that there will be less garbage and other plastics entering the marine environment. Ingestion and entanglement in plastic and marine debris also are leading causes of injury to sea turtles.”