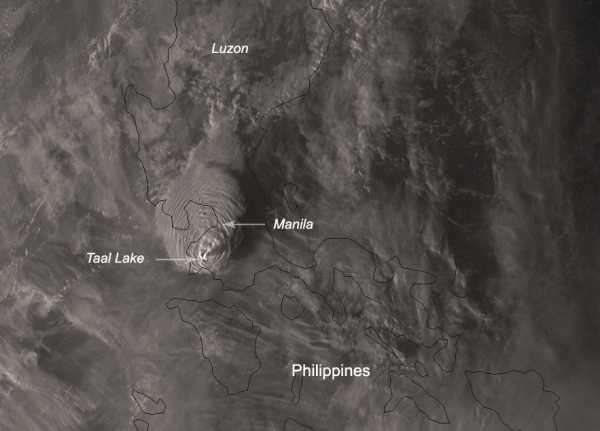 Located on Luzon Island, the Taal volcano began to erupt around 5:30 p.m. local time on Sunday, Jan. 12 (4:30 a.m. EST, 0930 GMT), according to a statement from the National Oceanic and Atmospheric Administration (NOAA).

operated by Japan, NASA and the NOAA captured views of the volcano from space, revealing the widespread ash and smoke that spread across the island and surrounding areas in the aftermath of the eruption.

A close-up of the Himawari-8 satellite view of the Taal volcano eruption in the Philippines on Jan. 12, showing the ash plumes that extended 9 miles (14 kilometers) into the air.

“On Jan. 12, 2020, the Himawari-8 satellite captured an image of the Philippines during the aftermath of Taal Volcano’s first volcanic eruption in over forty years,” NOAA officials wrote in a statement. “Eruptive activity, which has been occurring since 5:30 p.m. local time on Jan. 12, has generated steam-laden plumes up to nine miles tall, causing travel disruptions and extreme weather events in and around the vicinity of its location in Volcano Island, south of the archipelago’s capital city of Manila.”

Clouds of ash have spread more than 62 miles (100 kilometers) north, reaching the capital city of Manila. The Advanced Himawari Imager (AHI) on Japan’s Himawari-8 satellite captured visible light and infrared images of the region. The NOAA shared an animation of the satellite imagery, showing the growth of the steam-laden plumes.

The #Himawari8 🛰️ viewed yesterday’s #eruption of the #TaalVolcano via a combination of visual and infrared bands. The #volcano is the second most active in the #Philippines, and spewed #ash more than nine miles into the air. #Taal #TaalVolcano2020 #TaalEruption2020 pic.twitter.com/AteVvj5dM1January 13, 2020

The Joint Polar Satellite System (JPSS) also captured views of the volcano’s eruption — which was the first since 1977. The Taal Volcano is considered the second most active in the Philippines, according to the NOAA.

The NOAA-20 satellite provided an infrared view of the eruption, while the Ozone Mapping and Profiler Suite (OMPS) instrument on the Suomi National Polar-orbiting Partnership (Suomi NPP) satellite captured traces of sulfur dioxide from the volcano. The JPSS Program shared a side-by-side view of the two images on Twitter. 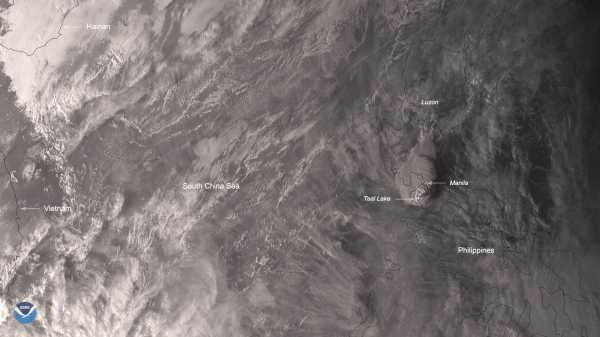 A wide view of the Himawari-8 satellite image of the Philippines during the aftermath of Taal volcano eruption on Jan. 12, showing the ash plumes that extended 9 miles (14 kilometers) into the air.

Yesterday, the #Taalvolcano in the Philippines spewed ash clouds more than 62 miles north of the volcano. #NOAA20 spotted the volcano’s eruption in infrared yesterday, while today #OMPS on #SuomiNPP saw the sulfur dioxide from the volcano. Both images are below #TaalEruption2020 pic.twitter.com/ZdhLRAyRYUJanuary 13, 2020

In the wake of the eruption, all residents within a nine-mile radius have been ordered to evacuate the area due to the high risk for subsequent eruptions, reduced visibility and health concerns, such as irritation and breathing problems. Intermittent rainfall is also expected in the area, which may trigger flash flooding or landslides, NOAA officials have said.