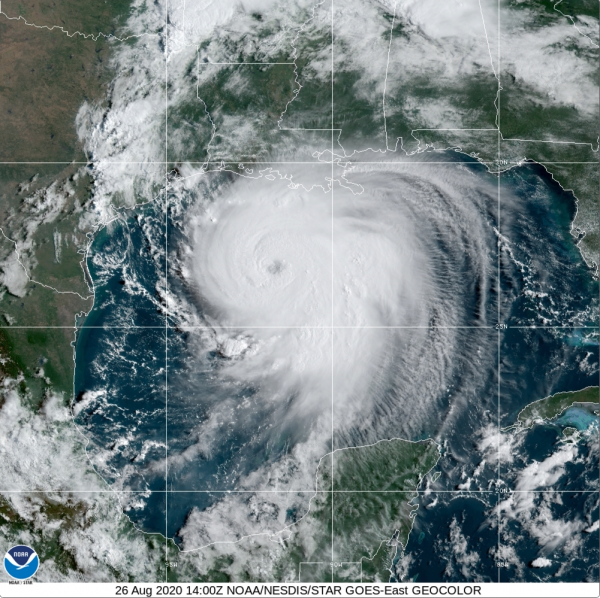 Satellite image shows Hurricane Laura swirling over the Gulf of Mexico on Aug.26 at 10 a.m. ET

Editor’s Note: This story was updated at 2:21 p.m. ET to note that Laura has strengthened to a Category 4 storm, and to provide updated information on its wind speeds.

Hurricane Laura has now strengthened into an «extremely dangerous» Category 4 storm with maximum  sustained winds of nearly 140 mph (220 km/h), according to the National Hurricane Center.

As of 2 p.m E.D.T. on Wednesday (Aug. 26), Laura is moving toward the northwest near 16 mph (26 km/h) and is expected to approach Texas and southwestern Louisiana coasts this evening, according to the NHC. At least 20 million people reside in the path of the hurricane and over half a million have been ordered to evacuate, according to CBS News.

TROPICAL UPDATE: The latest forecast from @NHC_Atlantic has Hurricane #Laura strengthening to a devastating Cat-4 #hurricane. In this imagery from @NOAA’s #GOES16 early this morning, you can see its eye while #lightning flashes around the storm. https://t.co/VTAp4gGkHs https://t.co/JgRDiATanM pic.twitter.com/KLOt8PSlwIAugust 26, 2020

«Unsurvivable storm surge with large and destructive waves,» will cause «catastrophic damage» from Sea Rim State Park in Texas to the Intracoastal City in Louisiana, according to the NHC. This storm surge can reach up to 30 miles (48 km) inland and «Only a few hours remain to protect life and property and all actions should be rushed to completion,» according to the NHC. 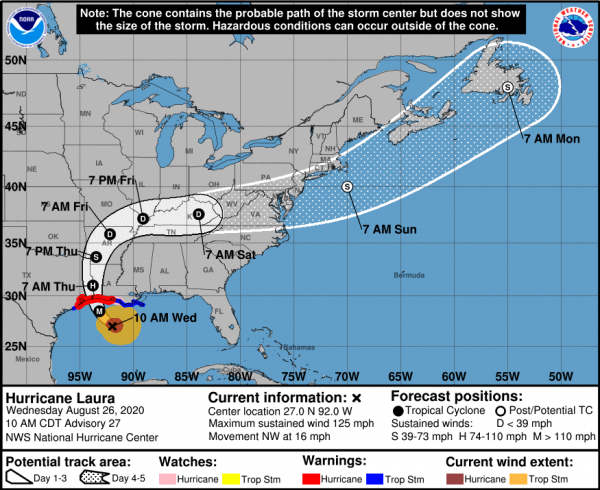 Here is the projected path of Hurricane Laura, expected to strengthen into a Category 4 hurricane.

«The storm surges are likely going to be the most impactful events of this storm,» U.S. Geological Survey oceanographer Kara Doran, leader of the USGS Coastal Change Hazards Storm Team based in St. Petersburg, Florida said in a statement. «The coast is vulnerable with back-to-back storms in the same general area.”

— Hurricanes from Above: Images of Nature’s Biggest Storms

— A History of Destruction: 8 Great Hurricanes

A Man Caught a Spider Eating His Pet Goldfish and, Well,...