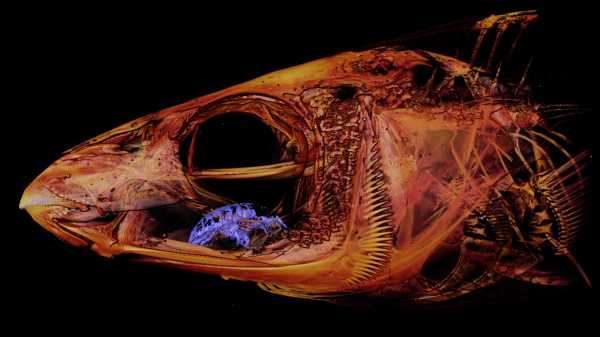 When scientists recently X-rayed a fish’s head, they found a gruesome stowaway: A «vampire» crustacean had devoured, then replaced, its host’s tongue.

The buglike isopod, also called a tongue biter or tongue-eating louse, keeps sucking its blood meals from a fish’s tongue until the entire structure withers away. Then the true horror begins, as the parasite assumes the organ’s place in the still-living fish’s mouth.

Biologist Kory Evans, an assistant professor in the Department of BioSciences at Rice University in Houston, Texas, discovered the tongue biter while digitizing X-rays of fish skeletons. He shared images of the surprising and horrifying find on Twitter on Aug. 10: «Mondays aren’t usually this eventful,» Evans joked in the tweet.

There are about 380 species of tongue-eating isopods, and most target a specific fish species as their host, according to the Two Oceans Aquarium in Cape Town, South Africa. This type of isopod enters a fish’s body through the gills, latches onto the tongue and begins to feed, releasing an anti-coagulant to keep the blood flowing. The parasite grips the base of the tongue tightly with its seven pairs of legs, reducing the blood supply so that the organ eventually atrophies and drops off, according to the Australian Museum.

From that point on, the isopod’s body serves as a functional tongue for the fish, while the tongue biter continues feeding on the fish’s mucus, according to Rice University’s Coral Reefs Blog. This partnership between a fish and its living tongue can continue for years; in many cases, fish have been known to outlive their tongue-replacing parasites, Stefanie Kaiser, a postdoctoral fellow at the National Institute of Water and Atmospheric Research in Wellington, New Zealand, told the American Association for the Advancement of Science.

The isopods parasitize fish through their gills, and then grow to be tongue-size as they consume their hosts’ tongues.

Evans encountered the fish and its macabre «living tongue» as part of a scanning initiative for a family of coral reef fishes called wrasses, he told Live Science. The project’s goal is to generate a 3D X-ray database of skeletal morphology for this fish group, making it available to researchers around the world, Evans said. He often shares examples of the scans on Twitter, under the hashtag #backdatwrasseup.

That morning, «I was doing something called digitizing,» he explained. «I compare skull shapes of all these different fish to each other, that requires placing landmarks — digital markers — on different parts of the body.» In one particular wrasse, a herring cale (Odax cyanomelas) from New Zealand, Evans noticed something odd in the mouth cavity.

«It looked like it had some kind of insect in its mouth,» Evans said. «Then I thought, wait a minute; this fish is an herbivore, it eats seaweed. So I pulled up the original scan, and lo and behold, it was a tongue-eating louse.»

Mondays aren’t usually this eventful. I found a tongue-eating isopod (purple) in one of our wrasse scans this morning while digitizing it. These parasites attach themselves to the tongues of fishes and effectively become the new tongue…horrifying #backdatwrasseup pic.twitter.com/axlraUrh8WAugust 10, 2020

Even when wrasses haven’t been parasitized by these tongue-biting horrors, they are still extremely weird, Evans told Live Science.

Some wrasses called parrot fish have copper-reinforced beaks that are tough enough to bite through coral. And the slingjaw wrasse (Epibulus insidiator) can launch its jaws forward up to 65% the length of its head, to snap up evasive prey.

«It’s like if you saw a Cheeto on the other side of your kitchen, and you just throw your jaws at it while standing in place,» Evans said.

Where is Cleopatra’s tomb?

Thailand speedboat crash kills one and injures 12 — including British...