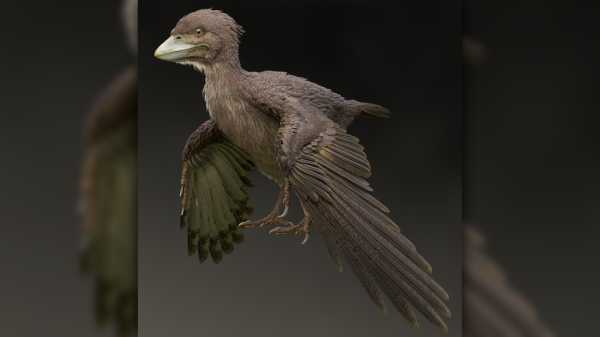 Around 120 million years ago, a bird about the size of a pigeon fluttered through Cretaceous forests in what is now Japan. The newly discovered fossil, preserved in three dimensions, is the first primitive Cretaceous bird found outside China. And it may force scientists to rethink some details in the evolution of flight.

The ancient avian, named Fukuipteryx prima, displays something found in modern birds that is absent in other early Cretaceous bird fossils: a bony plate near the tail.

Previously, it was thought that birds’ tails shortened as the animals adapted to flight. But Fukuipteryx is a more primitive bird than the last of the long-tailed flyers, a genus called Jeholornis that lived in China around 122 million to 120 million years ago, Imai said. This suggests that the loss of long tails, and the appearance of the pygostyle, may not be linked to flight.

“We still need more evidence to clarify this,” he said.

Prior to this discovery, the only bird fossils from the early Cretaceous came from northeastern China, offering an incomplete view of how birds’ distinctive adaptations emerged in the avian family tree, the study said.

“New findings from Japan and other regions in the world may completely change the picture again about what we think of the evolution of flight in the birds,” Imai added.

The findings were published online today (Nov. 14) in the journal Communications Biology.