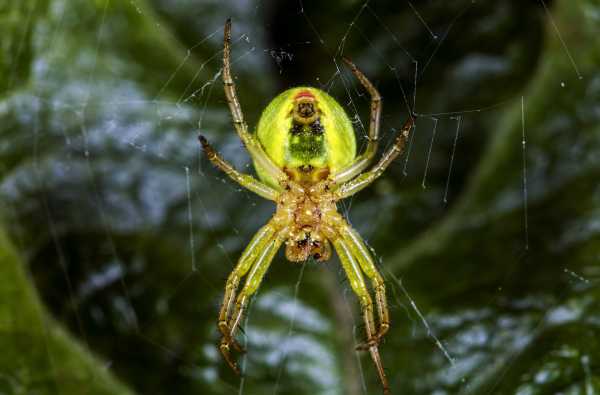 The newfound Araniella villanii is an orb-weaver spider, a group that uses math to spin their webs.

A newly discovered neon-green spider that uses math to build its incredibly precise and consistent webs has just been named after the “Lady Gaga of mathematics.” The bright-green arachnid is part of the orb-weaver spider family (Araneidae), whose members “tend to build beautiful and architecturally aesthetic webs” that look like they adhere to the golden ratio, study lead researcher Alireza Zamani, a doctoral student in the Biodiversity Unit at the University of Turku in Finland, told Live Science.

In fact, a close relative — the garden orb-weaver spider (Araneus diadematus) — creates about 30 radial threads (the spoke-like lines extending from the web’s middle) that form “an astonishingly constant angle of about 15 degrees, which the spider carefully measures using its front legs,” Zamani said.

. (It’s no wonder the nickname for Araniella is “green cucumber spiders,” Zamani said.)

“Living specimens of Araniella spiders usually have a beautiful, striking green coloration, which is quite rare in spiders,” Zamani said. “This is due to certain bile pigments called ‘biliverdin,’ which makes them very difficult to detect in nature.”

A. villanii also has spiky black hairs covering its body. These hairs are innervated, meaning they can sense the outside world, much like a cat’s whiskers.

This discovery shows just how many unknown species are likely still out there. A. villanii “is known from southwestern Iran, eastern Kazakhstan and northern India, a distribution range covering at least 10 countries, and yet, the species was unknown to science until now,” Zamani said.

The study was published online Jan. 22 in the journal ZooKeys.

Scientists discover ‘vampire’ star in the midst of a feeding frenzy