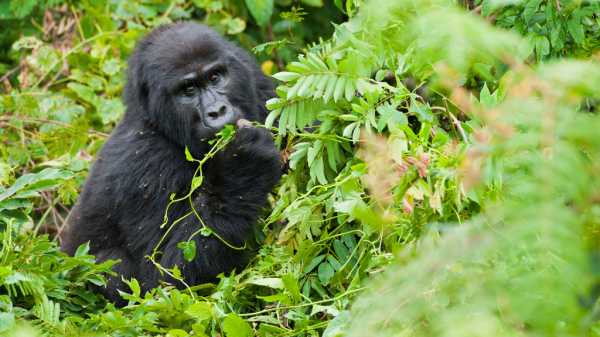 Mountain gorillas (Gorilla beringei beringei), a subspecies of eastern gorilla, live at elevations of 8,000 to 13,000 feet (2,400 to 4,000 meters) in the Congo Basin of Africa, according to the World Wildlife Foundation. Just more than 1,000 individuals remain in the wild, making the loss of any single gorilla potentially detrimental to the species’ survival, according to a statement from the the Greater Virunga Transboundary Collaboration (GVTC).

. After an initial lightning strike, electrical energy zips through the ground and can be absorbed by any animals standing nearby. The energy travels up one leg, through the body cavity and out a different leg, meaning animals with a large separation between their feet may suffer worse injuries than more compact creatures.

In this way, a single lighting strike can kill many animals at once. For example, in 2016, more than 300 reindeer perished during a violent lightning storm. Similarly, the four mountain gorillas likely died from a ground current as it rippled from the site of a direct lightning strike.

In recent decades, mountain gorilla populations have plummeted in the face of disease, war, unchecked hunting and habitat destruction. By 2008, only about 680 individuals remained, according to the International Union for Conservation of Nature (IUCN). Thanks to conservation efforts, the population swelled to more than 1,000 by 2018, prompting the IUCN to upgrade the subspecies from “critically endangered” to “endangered.”

Despite the improvement, mountain gorillas still face the threat of extinction. The deaths of three female gorillas constitutes a huge loss for the species, according to the GVTC statement.

The deaths of four mountain gorillas “was extremely sad,” Andrew Seguya, executive secretary of the GVTC, told BBC News. “The potential of the three females for their contribution to the population was immense.”