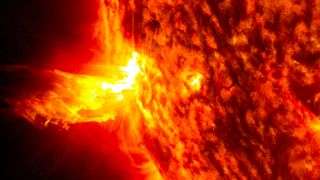 On June 20, 2013, at 11:15 p.m. EDT, the sun shot out a solar flare (left side), which was followed by an eruption of solar material shooting through the sun’s atmosphere.

The sun constantly bombards Earth with wispy belches of plasma called solar wind. Normally, the planet’s magnetic shield soaks up the brunt of these electric particles, producing stunning auroras as they surge toward Earth’s magnetic poles. But every so often, there comes a solar sneeze powerful enough to body-slam our atmosphere.

These severe space weather events — known as solar storms — compress Earth’s magnetic shield, releasing enough power to blind satellites, disrupt radio signals and plunge entire cities into electrical blackouts. According to a study published Jan. 22 in the journal Geophysical Research Letters, they may be much more common than previously thought.

In the new study, researchers analyzed a catalog of Earth’s magnetic field changes going back to 1868; years that showed the strongest spikes in geomagnetic activity coincided with the most severe solar storms. They found that severe storms (those capable of disrupting some satellites and communications systems) occurred in 42 of the last 150 years, while the most extreme storms — “great” super-storms, which cause significant damage and disruption — occurred in six of those years, or once every 25 years.

“Our research shows that a super-storm can happen more often than we thought,” study co-author Richard Horne, a space weather researcher at the British Antarctic Survey, said in a statement. “Don’t be misled by the stats. It can happen any time. We simply don’t know when.”

Attack of the sun

For the new study, the researchers consulted the world’s oldest continuous geomagnetic index, known as the index.

Unsurprisingly, most of those years were associated with powerful geomagnetic storms.

“The earliest ones would have been reported in terms of auroras (‘northern lights’) at low latitudes, and disruptions to telegraph communications,” lead study author Sandra Chapman, an astrophysics professor at the University of Warwick in England, told Live Science in an email. “As aviation and radio came into widespread use, reports centered on disruptions to those.”

A geomagnetic storm in May of 1921, for example, caused widespread radio and telegraph outages across the world, resulting in at least one telegraph operator’s instrument bursting into flames and setting his office on fire, according to a report published in 2001 in the Journal of Atmospheric and Solar-Terrestrial Physics. The northern and southern auroras (which intensify during solar storms) were also visible at far lower latitudes than usual, with one observatory claiming to detect the southern lights from the island of Samoa, just 13 degrees south of the geomagnetic equator.

More recent solar storms, such as a massive flare that swept over Earth on Halloween 2003, disrupted communications satellites and caused other spacecraft to tumble out of control. In March 1989, a gargantuan solar storm plunged the entire province of Quebec, Canada, into darkness and left millions of people without power for 12 hours.

Earth hasn’t been hit with a solar super-storm in nearly two decades (though a large, potentially damaging solar ejection passed by us in 2012). Since then, our world has become more networked and satellite-dependent; the precise impacts the next super-storm will have on our society aren’t well understood, Chapman said. Studies like this can help scientists predict the likelihood that a powerful space storm might hit Earth in a given year, which could lead to better preparedness, she added.

Powerful solar ejections occur more frequently when there are a lot of sunspots on the sun’s surface. Sunspot activity tends to peak approximately every 11 years, during a period called solar maximum. The last solar maximum occurred in 2014.