Home Animals Some Pandas Use Their Head to Climb. Others Just … Can’t. And... 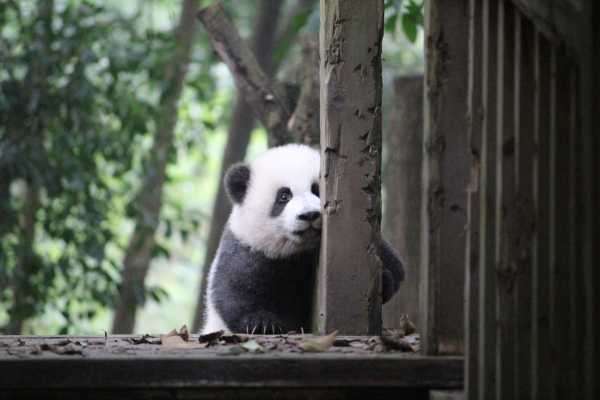 AUSTIN, Texas — Pandas are bears, and bears climb trees, so it’s logical to assume that all pandas probably know how to climb trees, right? Wrong. New research shows that some pandas just aren’t capable clamberers (and the video evidence is adorable).

Researchers evaluated the climbing skills of young giant pandas (Ailuropoda melanoleuca) as part of a captive rearing and release program at the Chengdu Research Base of Giant Panda Breeding in China. The team found that not all pandas can climb, and the best climbers make use of their head to help shinny up the tree, said Andrew Schulz, a conservation physicist at the Georgia Institute of Technology. Schulz presented his team’s research here at the Society for Integrative and Comparative Biology meeting on Saturday (Jan. 4).

Pandas are weird for several reasons, he said, but one reason is that their body shape doesn’t resemble that of any of the other seven bear species that exist. Instead, the panda body shape is more like that of a corgi, or even a hippo — they all have a very large body and large head with relatively short, stout legs. Animals with that body shape aren’t known to climb trees, yet pandas can climb trees. (Well, some of them, at least.) But until now, scientists had never systematically judged how, or how well, these lovable bears could climb.

“It’s very odd that [pandas] are such good climbers because of their body shape,” Schulz said.

Schulz and his colleague, Rose Zhao, watched eight precious, 1-year-old panda cubs climb bare tree trunks in a captive enclosure. The researchers discovered that some of the pandas were really great climbers while others were just terrible at it. The pandas that were better climbers figured out how to use their head to grip the tree in order to climb, which is not something other animals do, Schulz said. And, hugging the tree with their head helped keep the panda’s center of gravity directly above their rear legs, which gave them more stability as they climbed. Human rock climbers aim to keep their bodies close to the rocks and directly above their feet while hugging the climbing wall for the same reason.

Climbing is an important skill for pandas that are going to make it in the wild.

The giant panda is China’s national treasure, and the species is considered vulnerable to extinction under the IUCN Red List of Threatened Species. One of the main threats to the panda’s survival is the population of feral dogs that roam the forests where pandas live. Packs of dogs will hunt pandas; and if even if the dogs don’t succeed in killing a panda, they can transfer diseases to the bears. These large bears aren’t particularly agile or swift creatures, so their primary escape route is up. If they can’t make it up a tree, they will get injured or killed, so climbing is an important skill for a panda.

The panda cubs at the Chengdu Panda Base that are most skilled at activities like climbing, eating and walking are more likely to survive in the wild and therefore are good candidates for release. It’s still unclear if these baby pandas are capable of learning to climb as they age. So, Schulz and his colleagues plan to revisit these same panda cubs next year to see if any of the adorable black-and-white floofs that were having trouble climbing have managed to figure it out.