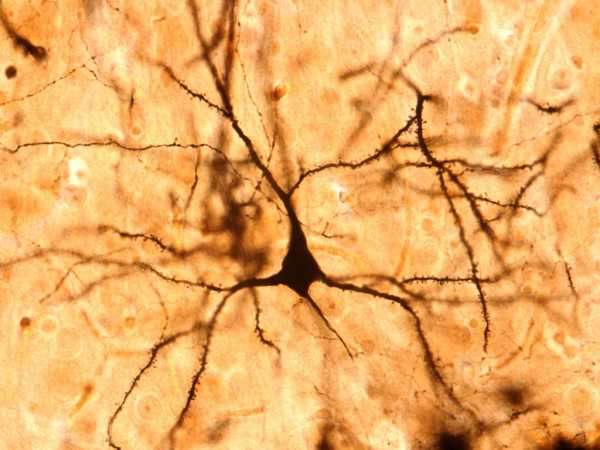 Cells nestled in the outermost layers of the human brain generate a special kind of electrical signal that might grant them an extra boost of computing power, new research suggests. What’s more, this signal may be unique to humans — and may explain our unique intelligence, according to the study authors.

Brain cells, or neurons, link up through long, branching wires and shuttle messages along these cables to communicate with each other. Each neuron has both an outgoing wire, called an axon, and a wire that receives incoming messages, known as a dendrite. The dendrite passes on information to the rest of the neuron through bursts of electrical activity. Depending on how the brain is wired up, each dendrite may receive hundreds of thousands of signals from other neurons along its length. While scientists believe these electrical spikes help wire the brain and may underlie abilities like learning and memory, the exact role of dendrites in human cognition remains a mystery.

, notes that the newfound electrical property has never been observed in any animal tissue other than human, raising the question of whether the signal uniquely contributes to human intelligence, or to that of primates, our evolutionary cousins.

Up until now, most dendrite studies have been carried out in rodent tissue, which shares basic properties with human brain cells, said study co-author Matthew Larkum, a professor in the department of biology at Humboldt University in Berlin. However, human neurons measure about twice as long as those found in a mouse, he said.

“That means the electrical signals have to travel twice as far,” Larkum told Live Science. “If there was no change in the electrical properties [between rodents and people], then that would mean that, in the humans, the same synaptic inputs would be quite a bit less powerful.” In other words, electrical spikes received by a dendrite would weaken significantly by the time they reached the cell body of the neuron.

So Larkum and his colleagues set out to uncover the electrical properties of human neurons to see how these longer dendrites actually manage to send signals effectively.

This was no easy task.

First, the researchers had to get their hands on human brain tissue samples, a notoriously scarce resource. The team ended up using neurons that had been sliced from the brains of epilepsy and tumor patients as part of their medical treatment. The team focused on neurons resected from the cerebral cortex, the wrinkled exterior of the brain that contains several distinct layers. In humans, these layers hold dense networks of dendrites and grow to be extremely thick, an attribute that may be “fundamental to what makes us human,” according to a statement from Science.

“You get the tissue very infrequently, so you’ve just got to work with what’s in front of you,” Larkum said. And you have to work fast, he added. Outside the human body, the oxygen-starved brain cells only remain viable for about two days. To take full advantage of this limited time window, Larkum and his team would gather measurements from a given sample for as long as they could, sometimes working for 24 hours straight.

During these experimental marathons, the team chopped brain tissue into slices and poked holes in the dendrites contained within. By sticking thin glass pipettes through these holes, the researchers could inject ions, or charged particles, into the dendrites and observe how they changed in electrical activity. As expected, the stimulated dendrites generated spikes of electrical activity, but these signals looked very different from any seen before.

Each spike ignited for only a brief period of time — about a millisecond. In rodent tissue, this type of supershort spike occurs when a flood of sodium enters a dendrite, triggered by a particular accumulation of electrical activity. Calcium can also trigger spikes in rodent dendrites, but these signals tend to last 50 to 100 times longer than sodium spikes, Larkum said. What the team saw in human tissue, though, seemed to be a strange hybrid of the two.

“Although it looked like a sodium event, it was actually a calcium event,” Larkum said. The team members tested what would happen if they prevented sodium from entering their sample dendrites and found that the spikes continued to fire unabated. What’s more, the supershort spikes fired in rapid succession, one right after the other. But when the researchers blocked calcium from entering the neurons, the spikes stopped short. The scientists concluded that they had stumbled upon a brand-new class of spike, one similar in duration to sodium but controlled by calcium.

“These [spikes] look different than whatever we have known so far from other mammals,” said Mayank Mehta, a professor in the departments of neurology, neurobiology physics and astronomy at the University of California, Los Angeles, who was not involved in the study. The big question is, how do these spikes relate to actual brain function, he said.

Larkum and his colleagues couldn’t test how their sliced-up samples might behave in an intact human brain, so they engineered a computer model based on their results. In the brain, dendrites receive signals along their length from nearby neurons that can either push them to generate a spike or prevent them from doing so. Similarly, the team designed digital dendrites that can be stimulated or inhibited from thousands of different points along their lengths. Historically, studies suggest that dendrites tally up these opposing signals over time and fire a spike when the number of excitatory signals outnumbers the inhibitory ones.

But the digital dendrites didn’t behave this way at all.

“When we looked closely, we could see that there was this strange phenomenon,” Larkum said. The more excitatory signals a dendrite received, the less likely it was to generate a spike. Instead, each region in a given dendrite seemed “tuned” to respond to a specific level of stimulation — no more, no less.

But what does this mean in terms of actual brain function? It means that dendrites may be processing information at each and every point along their lengths, working as a unified network to decide which information to send along, which to discard and which to handle alone, Larkum said.

“It doesn’t look that the cell is just adding things up — it’s also throwing things away,” Mehta told Live Science. (In this case, the “throw away” signals would be excitatory signals that are not properly tuned to the dendritic region’s “sweet spot.”) This computational superpower could enable dendrites to take on functions once thought to be the work of whole neural networks; for instance, Mehta theorizes that individual dendrites could even encode memories.

Once, neuroscientists thought that whole networks of neurons worked together to perform these complex calculations and decided how to respond as a group. Now, it seems like an individual dendrite does this exact type of calculation all on its own.

It may be that only the human brain possesses this impressive computational power, but Larkum said that it’s too early to say for sure. He and his colleagues want to search for this mysterious calcium spike in rodents, in case it has been overlooked in past research. He also hopes to collaborate on similar studies in primates to see if the electrical properties of human dendrites are similar to those of our evolutionary relatives.

Mehta said that “it’s very unlikely” that the newfound spike is unique to humans. In past research, Mehta found that rodent dendrites also generate a wide variety of spikes whose exact function remains unknown. What’s interesting is that only a fraction of these spikes actually trigger a reaction in the cell body they plug into, he said. In rodent neurons, roughly 90 percent of dendritic spikes don’t prompt electrical signals from the cell body, suggesting that dendrites in both rodents and humans may be processing information independently, in ways we don’t yet understand.

Much of our understanding of learning and memory stems from research on electrical activity generated in the neuron cell body and its output cable, the axon. But these findings suggest that “it may be that the majority of spikes in the brain may be taking place in the dendrites,” Mehta said. “Those spikes could change the rules of learning.”