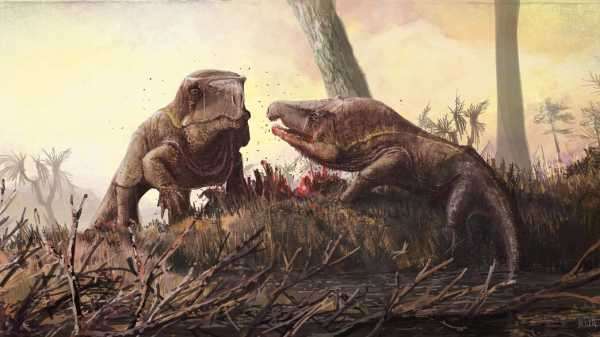 Millions of years before the dinosaurs, tank-like predators that looked like Komodo dragons with absurdly huge heads roamed the planet. And it turned out that these reptiles, known as erythrosuchids (eh-rith-roe-SUE-kids) may have evolved their enormous noggins as they became “hypercarnivores,” a new study suggests.

With their powerful jaws and “steak-knife like teeth,” they were likely “at the top of the food chain” in their ecosystems, said lead study author Richard Butler, a professor of paleobiology with the School of Geography, Earth and Environmental Sciences at the University of Birmingham in the United Kingdom.

, according to the study.

“They are close to the ancestral lineage of archosaurs — the group including birds, dinosaurs, crocodilians and pterosaurs,” Butler told Live Science in an email.

Even to an untrained eye, these ancient beasts’ heads look unusually huge, and researchers hoped that a more thorough investigation of erythrosuchids fossils could shed light on why they evolved such bizarrely huge heads.

The scientists compared data on head and femur length in erythrosuchids to those measurements from other four-limbed animals, living and extinct. Their findings confirmed that erythrosuchids’ massive heads were, in fact, proportionally larger than any reptiles’. This feature likely evolved as the group adapted to fill ecological niches as hypercarnivores — animals that eat only meat.

With such huge skulls, erythrosuchids’ jaws and teeth would have had a greater reach than their smaller-headed competitors, and larger muscles could have lent them a more powerful bite, said paleontologist and freelance paleoartist Mark Witton. Witton, who was not involved with the new study, reconstructed one of the species of erythrosuchid, Garjainia madiba, in an illustration for a prior study on the creature.

“It’s not just their head size that is interesting: their jawlines and dental configuration are also quite sophisticated,” Witton told Live Science in an email. And while questions remain about how these ancient “dragons” used their jaws, one thing is certain: Their heads weren’t as heavy as they looked. Skulls in this reptile group were full of air pockets, which made them relatively light. And in any case, they would have been held up by robust neck muscles, Witton explained.

“They likely wielded their heads with precision and finesse, despite their size,” he said. “The head might be huge, but we can see that it’s well supported and mounted to a powerful, muscular body.”

The findings were published online Nov. 20 in the journal Royal Society Open Science.

How Rabies Inspired Folktales of Werewolves and Vampires