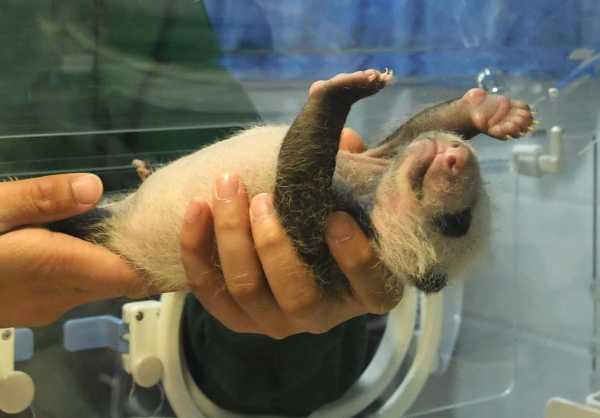 A newborn panda cub in an incubator at Chongqing Zoo, China on June 23, 2019. Newborn giant pandas are tiny compared to their moms.

Giant panda babies are born weirdly tiny and underdeveloped. No one knows why, and the major theory just turned out to be wrong.

Carnivorans — an order of mammals that includes all bears, dogs, cats, raccoons, weasels and seals, among other species — tend to enter the world small, weak, hairless and blind, according to a new paper published Dec. 2 in the Journal of Anatomy. But bears in particular tend to give birth to unusually small cubs.

. Li was an undergraduate at Duke University at the time of the research and is now a doctoral student at the University of Chicago.

Panda babies are bizarrely tiny. At birth, the cubs weigh just about 3.5 ounces (100 grams), which means that panda mothers are 900 times larger as their babies. Only a handful of other animals, including kangaroos and echidnas, have similar weight differences at birth. Still, it seemed possible that this was part of a universal bear story ; polar bear mothers are 400 times the weight of their newborns. The average mammalian ratio is 1:26.

Newborn pandas are difficult to study. There aren’t very many of them in captivity, they’re carefully protected and most survive after birth — which means there are few panda cub remains that can be closely analyzed. But in the 1980s, the first panda couple at the Smithsonian National Zoo in Washington, D.C., gave birth to five cubs, all of which died soon after birth.

A CT scan shows the underdeveloped skull of a baby panda.

Li and her co-author, Duke biology professor Kathleen Smith, got their hands on two of those preserved cubs. The researchers used a CT scanner to build 3D models of the unfortunate critters’ skeletons. They also scanned newborn grizzlies, sloth bears, polar bears, dogs, a fox and other animals. Comparing all the skeletons, Li and Smith found that pandas appeared to have uniquely under-developed bones at birth — similar to those of a premature beagle puppy they had also studied.

“That would be like a 28-week human fetus,” Smith said in the statement.

Other bears, though small, are born with skeletons comparable to other related mammal species — with no significant differences based on whether the species hibernates.

Bear pregnancies in general are a bit unusual: The fertilized egg floats around the womb for several months before implanting in the uterine wall to begin development. At that point, most bears take two months to develop, but pandas just take one.

For now, no one knows why. But as the species struggles, the question becomes more urgent, the authors wrote in the study.

Coronavirus in the US: Latest COVID-19 news and case counts

MH370 news: How hijacker ‘could have survived and fooled everyone’