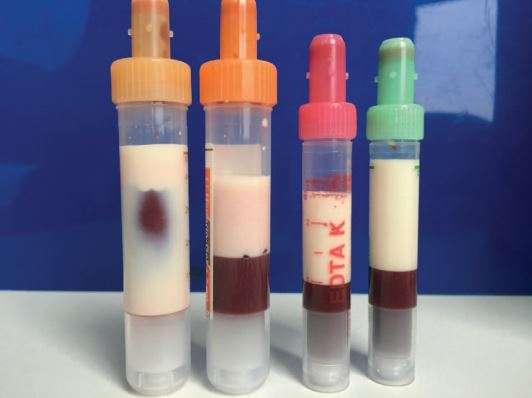 A man in Germany had extraordinarily high levels of triglycerides, a type of fat, in his blood. Above, samples of the man’s blood about two hours after they were drawn. The white is the fat.

A man’s blood was so thick with fat, his doctors needed to manually draw blood — a practice known as bloodletting — to help save his life, according to a new report of the unusual case.

The 39-year-old man had gone to the emergency room after experiencing nausea, vomiting, headaches and decreased alertness. He had diabetes, and was on several drugs to treat the condition, but wasn’t taking these medications regularly, according to the case report, published today (Feb. 25) in the journal Annals of Internal Medicine.

The triglycerides levels were so high that the man’s blood took on a milky color, said case report co-authors Dr. Philipp Koehler and Dr. Matthias Kochanek, of the University Hospital of Cologne in Germany, who treated the patient. [27 Oddest Medical Case Reports]

Such high levels of triglycerides can cause inflammation of the pancreas, or pancreatitis, a potentially serious condition. Indeed, tests showed the man had elevated levels of pancreatic enzymes, which can be a sign of this condition.

Tests also revealed that the man had diabetic ketoacidosis — a potentially life-threatening complication of diabetes that occurs when the body breaks down fat at a rapid rate, which leads to a buildup of acids in the blood called ketones, according to the NIH. Ketoacidosis happens because the body doesn’t produce enough insulin, a hormone that helps sugar, or glucose, get into cells so that the sugar can be used as fuel. (Without glucose, the body turns to fat as fuel.) It’s treated, in part, with infusions of insulin into the veins.

When a patient has extremely high triglyceride levels, doctors can use a machine to filter the fat out of the blood — a process known plasmapheresis. But when the man’s doctors attempted plasmapheresis, the machine became clogged due to the extremely high blood fat levels.

His doctors attempted plasmapheresis a second time, but the machine still clogged. That’s when they turned to bloodletting. They drew a liter of the man’s blood, and replaced it with red blood cells and plasma (the liquid portion of blood) from a donor. This led to a decrease in the man’s triglyceride levels, so the doctors withdrew another liter, this time replacing it with fluids.

Two days later, the man’s triglyceride levels were low enough for the plasmapheresis machine to work without clogging. Five days later, doctors were able to remove the patient’s breathing tube, and he didn’t have any lingering neurological symptoms.

Koehler and Kochanek told Live Science that they had never seen a case like this before. The new report suggests that, if plasmapheresis cannot be performed, “conventional bloodletting with [blood and fluid] replacement may be an effective alternative” for patients with extremely high triglycerides,” the authors concluded.

Dr. Guy Mintz, the director of cardiovascular health and lipidology at Northwell Health’s Sandra Atlas Bass Heart Hospital in Manhasset, New York, who was not involved in the case, said that the case report detailed ” a fascinating and innovative treatment adaptation to a life-threatening situation due to high triglycerides in the blood.” said

“I applaud the doctors for thinking out of the box” to attempt the bloodletting treatment, Mintz told Live Science. The report “gives [doctors] a new treatment option for extremely high triglycerides when standard hospital therapy … fails.”

The authors hypothesize that that man’s extremely high blood triglyceride levels were caused by a combination of insulin resistance, obesity, inappropriate diet and insufficiently treated diabetes. They noted that both ketoacidosis and very high triglyceride levels are signs of a lack of insulin. Testing also showed the patient had a genetic marker that’s associated with higher triglyceride levels, which may have also affected his risk. In addition, the patient was taking a diabetes medication called a sodium-glucose cotransporter-2 (SGLT2) inhibitor, and there is some concern that this medication may increase the risk of ketoacidosis, according to the U.S. Food and Drug Administration.