Home Health 6 Times Parasites Grossed Us Out in 2019 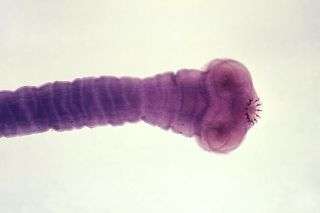 Some parasitic infections are deadly, while others are just a nuisance. But regardless of their severity, they always gross us out.

A parasite is essentially any organism that lives off another, getting its nutrients from its “host.”

Here are the weirdest parasitic infections we covered this year.

A woman in California was particularly unlucky when she contracted an eye worm infection, likely while on her trail run.

The 68-year-old woman is only the second person known to have contracted this particular worm, which typically infects cows, according to a report of the case, published Oct. 22 in the journal Clinical Infectious Diseases.

After going on trail runs in Carmel Valley, California, the woman noticed irritation in her right eye. That’s when she flushed her eye with tap water and saw a small roundworm come out.

The woman was eventually found to have an infection with a species of eye worm called Thelazia gulosa. This worm usually infects cattle and is carried by certain types of face flies. It’s not clear how the woman got the infection, but she may have contracted it during a trail run in which she ran into a swarm of flies. The woman and her doctors ultimately retrieved a total of four worms from her eyes. She regularly irrigated her eyes for weeks, and eventually, the worms cleared up.

The idea of having a tapeworm lurking in your brain sounds horrifying. But for a woman in New York, the news that she had this type of brain parasite was actually a relief.

The 42-year-old woman had been told that she might have a malignant brain tumor — a potentially devastating diagnosis. But when doctors performed brain surgery, they found a huge surprise: Instead of seeing the soft tissue typical of a brain tumor, they saw something that looked more like a rock or a quail egg. Even more shocking, a baby tapeworm emerged out of the “egg.”

The woman was diagnosed with neurocysticercosis, a parasitic disease that occurs when a person ingests microscopic eggs from a pork tapeworm (Taenia solium). When the eggs hatch, the larvae can travel throughout the body, including to the brain, where they form cysts. It’s unclear how the woman contracted the infection, which is rare in the U.S. But once the cyst was removed, she didn’t need any more treatment.

Keeping your contact lenses in while showering might seem like no big deal, but this habit can have a serious consequence: It puts contact lens wearers at risk for a parasitic eye infection that can cause blindness.

Two cases from 2019 highlight this risk. The first is that of a 41-year-old woman who kept her disposable contact lenses in while swimming and showering. She developed blurry vision, eye pain and sensitivity to light in her left eye. During an eye exam, doctors could see a cloudiness in the women’s cornea, the eye’s transparent outer covering. Samples from her eye tested positive for Acanthamoeba keratitis, a rare parasitic infection of the cornea.

This parasite is an amoeba that’s commonly found in water, soil and air, according to the Centers for Disease Control and Prevention (CDC). Contact lens wearers face a risk of contracting this infection if they engage in certain practices, such as disinfecting lenses with tap water or swimming or showering while wearing lenses.

Despite treatment, the woman was left with permanent vision loss, according to a report of her case, published July 17 in The New England Journal of Medicine.

In a similar case, a man in the United Kingdom said he contracted Acanthamoeba keratitis after wearing contact lenses in the shower, which also left him blind in one eye. “If I’d known how dangerous it was to wear contacts in the shower, I would never have got them in the first place,” the man said.

Two tourists, both residents of the mainland U.S., became infected with rat lungworm after they visited Hawaii in January and February 2019, according to the Hawaii State Department of Health. (The cases were unrelated.) In another case, a tourist became infected after ingesting a slug on a dare in late December 2018, although the case was not confirmed until 2019.

Rat lungworm is a disease caused by a roundworm parasite called Angiostrongylus cantonensis. As part of its life cycle, the parasite infects rodents, laying eggs in the animals’  pulmonary arteries, which carry blood to the lungs.

Humans can become infected if they eat raw or undercooked snails or slugs, which also carry the parasite. People may also catch the disease if they eat produce contaminated with A. cantonensis.

Infections with the “brain-eating” amoeba Naegleria fowleri are rare, but when they occur, they are often deadly. In 2019, the parasite made headlines when it led to the death of a man in North Carolina.

The 59-year-old man became ill in July after visiting Fantasy Lake Water Park, a man-made lake in the southeastern part of the state. He tested positive for N. fowleri, a single-celled organism that’s naturally found in bodies of warm freshwater, such as lakes and rivers.

Swallowing N. fowleri in water will not cause an infection. But if water containing this amoeba goes up the nose, the organism can enter the brain and be fatal. The amoeba destroys brain tissue, which results in brain swelling and usually death, according to the CDC.

Still, infections are extremely rare. From 1962 to 2018, there were just 145 cases of N. fowleri reported in the U.S. But the illness has a very high fatality rate — of the 145 cases, just 4 people survived.

Fly larvae can grow in some unusual places, including, it turns out, a person’s forehead. That was the case for a British woman who visited Uganda and unknowingly left the country with fly larvae in her noggin.

After returning home, the 55-year-old woman noticed a swollen lump on her forehead. At first, doctors thought the lump was an infected bugbite, but it kept getting bigger even with antibiotic treatment. Doctors later discovered a small opening in the area, which turned out to be a breathing hole for fly larvae, or maggots, living in her forehead, according to a report of the case, published Jan. 22 in the journal BMJ Case Reports.

The woman was diagnosed with an infestation of the Lund’s fly (Cordylobia rodhaini), a type of fly that lives in African rainforests and can infest human skin. More typically, such infestations are found in the chest, back, stomach or thighs.

The woman may have become infected when she wrapped her hair with a towel that had been hanging outside and had maggots on it. Doctors were able to successfully remove the maggots from the woman’s forehead.

Who Wrote The Pledge Of Allegiance? Inside The Controversial History