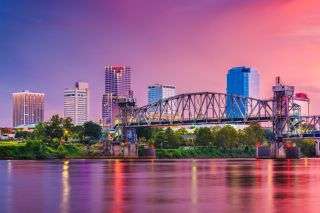 —Coronavirus in the US: Map & cases
—What are the symptoms?
—How deadly is the new coronavirus?
—How long does virus last on surfaces?
—Is there a cure for COVID-19?
—How does it compare with seasonal flu?

Arkansas has reported 3,527 confirmed cases of COVID-19 and 83 deaths as of Wednesday (May 6), according to the Arkansas Department of Health (ADH).

On Monday (May 4), Governor Asa Hutchinson announced that  theaters (including movie theaters), arenas, stadiums, lecture halls and other large venues may reopen on May 18 on a limited basis, according to a statement from Hutchinson’s office. Audiences must be limited to fewer than 50 people, and strict social distancing measures are required for performers, contestants, and members of the audience. For example, seating must be arranged to maintain a six-foot distance between audience members, every other row of seating must be unoccupied, lines for the entrance must be marked to maintain a six-foot distance between people, and performers must be  separated from the audience by at least 12 feet.

On May 1, Hutchinson announced that barber shops, body art establishments, massage therapy clinics and spas, and similar establishments may reopen on Wednesday (May 6), provided they follow specific safety guidelines, according to a statement from Hutchinson’s office. These include prohibiting walk-in appointments (customers must schedule an appointment), pre-screening customers for COVID-19 related symptoms before they arrive, screening employees with a questionnaire and temperature check, requiring employees to wear a mask at all times and clients to wear a mask as services permit, along with other precautions.

On April 30, Hutchinson announced that gyms and fitness centers may open for businesses starting Monday (May 4), although they must follow specific precautions. These include the use of face masks except when exercising, social distancing of at least 12 feet while exercising, and daily temperature checks for employees and customers, according to a statement from Hutchinson’s office.

On April 29, Hutchinson announced that restaurants in the state may resume limited dine-in service with certain restrictions starting May 11. During this “phase 1” of reopening, restaurants must limit dine-in customers to one-third of total capacity, place tables 10-feet apart and conduct daily health screenings of all employees, according to a statement from Hutchinson’s office. In addition, staff who interact with customers must wear a face mask, and kitchen staff are encouraged to wear a face mask. Customers must also wear a face mask until their food or drink is served, and must limit groups to 10 or fewer.

On April 28, Hutchinson announced that some state parks will soon begin a limited reopening for Arkansas residents. Starting May 1, residents with self-contained RVs will be allowed to stay overnight in campgrounds, according to a statement from Hutchinson’s office. On May 15, state parks will open visitor information centers, museums and exhibits, gift shops, marinas and equipment rentals, the statement said. On this date, parks also will reopen to cabins, lodges and RV rentals to  Arkansas residents from Friday to Monday.

As Arkansas discusses opening up businesses again, the ADH issued guidance urging people to wear cloth face coverings in public, even as some other restrictions are lifted. “Many people with COVID-19 have no symptoms and can spread the virus without knowing it. If everyone who can wear a face covering commits to wearing it, our return to normal life will move faster and be more successful,” the department said in its guidance.

In addition, Hutchinson released “target dates” for when officials will make decisions on whether to lift restrictions on certain businesses, provided that Arkansas continues to show a decline in spread of COVID-19. The dates are: April 29 for restaurants, April 30 for gyms and indoor recreational facilities, May 1 for beauty salons and barber shops, and May 4 for places of worship and larger venues. Still, Hutchinson stressed that even if restrictions are lifted on these businesses, people will need to continue wearing masks, practicing social distancing and limiting the size of gatherings.

“We are moving in the right direction,” Hutchinson said in the statement. “I am encouraged with the trends we are seeing. If we stay on target, our desire and intent is to start lifting restrictions. But we’re going to be watching the data every day. We’re going to take it a step at a time.”

On April 21, Governor Asa Hutchinson announced the creation of a working group to expand COVID-19 testing capacity in the state. The group will make recommendations on how to maintain adequate testing capabilities and conduct surveillance testing across the state, according to a statement from Hutchinson’s office.

“As we prepare to shift Arkansas’s economy out of low gear, it is important for us to have more comprehensive information about the spread of COVID-19 in the state,” Hutchinson said in the statement.

There is a large COVID-19 outbreak the state’s Cummins Unit prison, with approximately 600 cases total, 117 of which were reported on Monday (April 20), according to KAIT. Three of these cases are hospitalized.

On April 17, Hutchinson said he hopes to start easing social distancing restrictions in the state beginning May 4, in line with recent guidance from the White House on opening up the U.S. in three phases, according to THV11. However, the state will need to develop more testing and reduce positive cases over a two week before to begin the process.

Arkansas is one of only seven states that has yet to issue a specific state-at-home order for residents, according to CNN.

On April 13 Hutchinson announced the formation of a committee to advise the state’s response to COVID-19 after the “peak” of the outbreak has passed. The committee will examine testing abilities and social distancing protocols to make recommendations necessary to avoid another wave of COVID-19, according to a statement from Hutchinson’s office.

On April 6, Hutchinson announced that all public schools will remain closed for the rest of the academic year.

“The continued spread of COVID-19 throughout the nation does not give me confidence that our educators, parents, and, most importantly, our students would be safe if schools were to resume on-site instruction in April,” Hutchinson said in a statement. “Although on-site instruction has been discontinued until the 2020-2021 school year, it is critical that our students continue to learn at home.”

On April 4 Hutchinson issued an order that bans hotels and other short-term rentals from providing lodging to out-of-state residents. But there are exceptions for health care workers, first responders, law enforcement, military members and other critical personnel, according to KATV.

On April 1, Hutchinson recommended closing Buffalo National Park, saying that 60% of visitors were from out of state, meaning they could be coming from areas with a high number of COVID-19 cases, according to THV11. Also on Wednesday, Hutchinson said the state has partnered with Walmart and Quest Labs to start a drive-thru COVID-19 testing facility in Benton County, THV11 reported. Initially, testing would focus on first responders and health care workers.

Life after death: Man returned from vast darkness after flat-lining in...