Home Health British man found dead wedged down side of house after vanishing in... The body of Simon Ball, 56, was discovered by shocked locals when they heard his mobile phone ringing and police are now investigating his death as tragic accident

A British man was found dead after spending a night trapped in a tiny space down the side of a house.

Shocked locals discovered the body of Simon Ball, 56, on Monday morning when they heard his mobile phone ringing.

He was bent double in the narrow space between a dry stone wall at a the home on the island of Phuket, southern Thailand.

Rescue workers arrived and discovered he was holding a shopping bag with a pack of instant noodles.

He was wearing glasses, a watch and had small change in his pockets. The incident happened at a home near Phuket in southern Thailand
(Image: Getty Images/iStockphoto)

Police believe he had died after being unable to free himself or breathe properly while trapped in the uncomfortable position.

Officers are now investigating the bizarre death amid suspicions that Simon, whose apartment was a short walk away, may have slipped while trying to clamber along the edge at the side of the building.

Police Colonel Somkid Boonrat said: "There was no CCTV that shows the area but the examination results suggest that he died from falling. We don't know how that happened.

"We will report this incident to the British embassy and wait in case they request any further investigation." 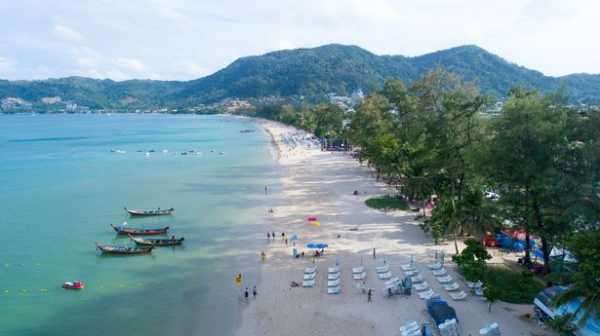 Police in the region are believe it may have been a tragic accident
(Image: Getty Images/iStockphoto)

Officers said that Simon had several bruises and scratches on his body which they believed were sustained in a fall from the building.

Doctors at the local hospital examined the body and noticed bruising on the back of Simon's head. They believe he had been dead for around 24 hours as his eyes had started to decompose.

Officers said they have contacted the British embassy.

They believe Simon had died after he fell and became trapped in the small gap without being able to escape.

Lt Watcharin Siriyaphat from the Kamala district Police said: ''The dead man was dressed in a black T-shirt, brown shorts, glasses, a had watch on his left wrist and a wristband on his right wrist.

''There are some scratches on the body. The body was taken to Patong Hospital for further examination.''

Orangutans and otters strike up darling friendship at Belgium zoo