Home Health Can the new coronavirus spread through building pipes? 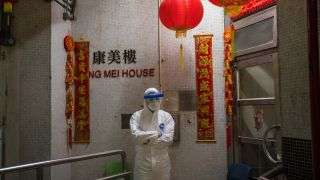 An official wearing protective gear stands guard outside an entrance to the Hong Mei House residential building at Cheung Hong Estate in Hong Kong on Feb. 11, 2020, following the evacuation of more than 100 people from the housing block after residents in two different apartments tested positive for the new coronavirus.

Two residents of a Hong Kong apartment building have fallen ill with the new coronavirus even though they live on different floors from each other, prompting concerns that the virus may spread through building pipes, according to news reports. But how exactly would the virus spread through pipes?

On Tuesday (Feb. 11), officials said they had evacuated and quarantined more than 100 residents of an apartment building in Hong Kong’s Tsing Yi area after a 62-year-old woman became the second person in the building to catch the new viral disease, now called COVID-19 (short for coronavirus disease 2019). She lived 10 floors below the first infected resident, raising the question of whether the virus could spread through the building infrastructure, such as through a pipe, The New York Times reported. Officials also found an unsealed pipe in the woman’s bathroom.

Officials are still investigating exactly how the virus may have transmitted between the two residents.

But there has been at least one instance of a coronavirus spreading through pipes.

In 2003, during the outbreak of severe acute respiratory syndrome, or SARS (which is also caused by a coronavirus) officials found that the virus was likely transmitted in a Hong Kong apartment tower called Amoy Gardens through faulty plumbing, according to the World Health Organization.

This happened because the SARS coronavirus could get into feces and thus into raw sewage. The pipes that carry raw sewage are “usually kept separate from people,” said Dr. Amesh Adalja, an infectious-disease specialist and a senior scholar at the Johns Hopkins Center for Health Security in Baltimore, Maryland. But if there are leaks or breaches in the pipes, it could allow people to be exposed. For example a faulty piping system could allow the virus to become “aerosolized” out of a pipe and get into the surrounding air, Adalja said.

At the time of the SARS outbreak, an investigation at Amoy Gardens indeed found problems with drainage pipes.

Here’s how that could happen: Typically, bathroom drains have a U-shaped trap that prevents fluids and odors from coming back up, but at Amoy Gardens, officials found that air would flow backward through the drains under certain circumstances, according to a Washington Post article published during the 2003 outbreak.

“When the bathroom was in use, with the door closed and the exhaust fan switched on, there could be negative pressure to extract contaminated droplets into the bathroom,” Yeoh Eng-kiong, Hong Kong’s secretary for health, welfare and food, said at the time, according to the Washington Post. “Contaminated droplets could then have been deposited on various surfaces such as floor mats, towels, toiletries and other bathroom equipment.”

With COVID-19, tests have also found the virus present in patients’ stool, suggesting the virus may be able to spread through fecal contamination. And the virus can cause abdominal symptoms, including diarrhea and nausea.

Still, even if coronaviruses can spread through pipes, it’s not a common mode of transmission, Adalja said. The most common way these viruses are transmitted is through respiratory droplets produced from coughs and sneezes, he said.

After evacuating residents from the Tsing Yi building, officials said that five other residents who showed flu-like symptoms tested negative for COVID-19, according to Reuters. And an initial investigation of the building’s plumbing system suggested it is a well-designed system, Reuters reported.