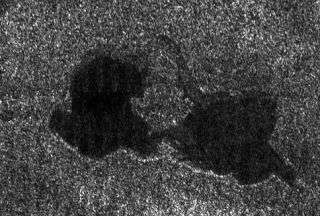 An image from NASA’s Cassini probe, taken Sept. 23, 2006, shows a pair of hydrocarbon lakes on Titan.

Saturn’s most Earth-like moon looks a bit less likely to host life, thanks to quantum mechanics, the weird rules that govern subatomic particles.

Titan, the second largest moon in our solar system after Jupiter’s Ganymede, is unique in two ways that have convinced some researchers that this moon might host extraterrestrial life: It’s the only moon in our solar system with a dense atmosphere, and it’s the only body in space, besides Earth, known to definitely have pools of liquid on its surface. In Titan’s case, those pools are frigid lakes of hydrocarbons, closer to the gasoline in a car than the oceans on Earth. But some researchers have suggested that complex structures could arise in those pools: bubbles with special properties that mimic ingredients found to be necessary for life on our planet.

On Earth, lipid molecules (fatty acids) can spontaneously arrange themselves into bubble-shaped membranes that form the barriers around the cells of all known life-forms. Some researchers think this was the first necessary ingredient for life as it formed on Earth.

On Titan, researchers have speculated in the past, an equivalent set of bubbles might have emerged, these consisting of nitrogen-based molecules called azotosomes.

But for those structures to arise naturally, the physics has to work just right in the conditions actually present on Titan: temperatures of about minus 300 degrees Fahrenheit (minus 185 degrees Celsius), without liquid water or atmospheric oxygen.

Previous studies, using molecular dynamics simulations — a technique often used to examine the chemistry of life — suggested that such bubble structures would arise and become common on a world like Titan. But a new paper, published Jan. 24 in the journal Science Advances, suggests that those earlier simulations were wrong.

Using more complex simulations involving quantum mechanics, the researchers in the new paper studied the structures in terms of their “thermodynamic viability.”

Here’s what that means: Put a ball at the top of a hill, and it’s likely to end up at the bottom, a position of lower energy. Similarly, chemicals tend to arrange themseIves in the simplest, lowest-energy pattern. The researchers wanted to know whether the azotosomes would be the simplest, most efficient arrangement for those nitrogen-bearing molecules.

Titan represents a “strict test case for the limits of life,” the researchers wrote in their paper. And in this role, the moon fails. Azotosomes, the simulation showed, just aren’t thermodynamically viable on Titan. 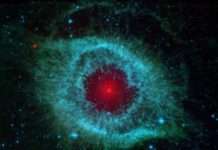 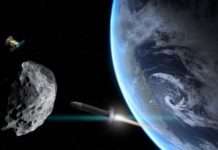 What should we do if a ‘planet-killer’ asteroid takes aim at Earth? 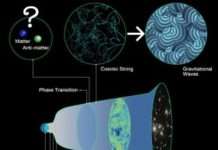